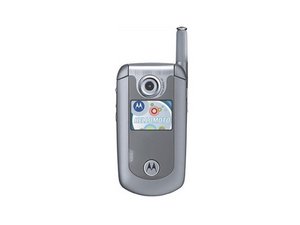 The Motorola E815 is a flip phone camera phone by Motorola.

When the phone was released in 2006 it was known as the Motorola Hollywood, but is now more formally called the E815. The E815 was carried by Verizon and Alltel until it was discontinued in 2008.

To verify that you have a Motorola E815 remove the back cover and access the model number beneath the battery. For step by step instructions see [Removing Battery Repair Guide].

The Motorola E815 has a 1.3 megapixel camera and a 96 X 64 pixel screen mounted on the exterior flip. This phone is offered in metallic silver with a steel grey trim. Located on the front cover of the phone is the Motorola logo. The phone features 40 megabytes of internal flash memory, a Bluetooth 1.1 and a USB connection.

For more information, check out these webpages: