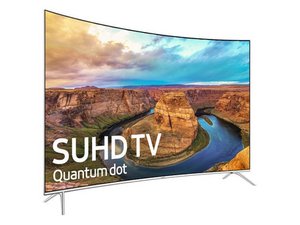 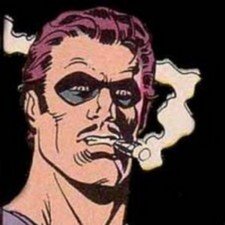 This began to occur a couple days ago when I was playing a game on my Xbox One, which was connected to the TV through my receiver. Mid-cutscene, the picture became darker (but still visible) and then vertical green lines appeared over the image, growing and moving horizontally across the screen. Once I realized this wasn’t some weird-ass cutscene thing, I turned everything off, waited a minute, and turned the receiver back on, which also powered on the TV via CEC, and then the power cycling began, which I eventually narrowed down the the TV behaving as I described above.

I took the back off the TV to see if I could find any obviously bad capacitors, but from what I can tell (I am no expert) they all look pretty good to me.

I was hoping somebody here could give me any advice and/or guidance. 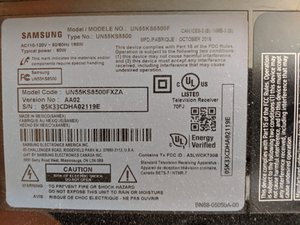 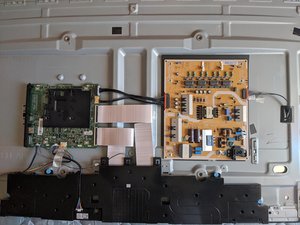 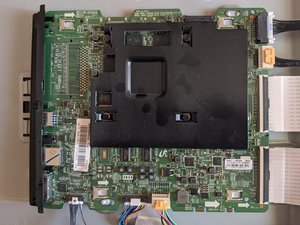 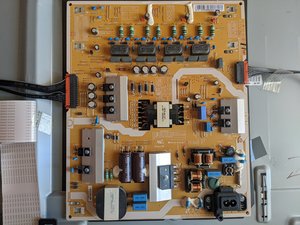 I did some more testing/experimenting/bumbling and determined that the TV will not power cycle when one half of the cable going between the power board and the main board is disconnected (it’s the “northmost” connection on the “east” side of the main board, see picture). 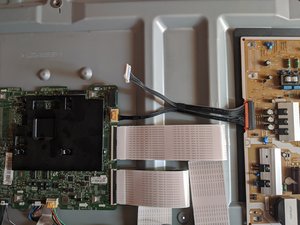 So, I think the problem might be the cable going between the power board and main board. I tried finding it on samsungparts.com, but the only cables listed there are FFC cables, so I’m not sure how to go about getting a replacement.

Thanks in advance for any ideas!

Disconnect the power from the TV.

Disconnect the cable between the power board and the mainboard.

Reconnect the power to the TV.

The TV screen backlights should turn on full and stay on. There will be no picture because the mainboard is disconnected.

If the backlights don’t stay on or they blink then there is a problem with the power board or the LED array.

Thanks. I did as you instructed and the backlight stayed on, so I tested the pins in the connector, which was labeled 13V. Each of the pins that were labeled 13V tested at 12.74V, so if I follow you correctly, it sounds like I should start looking at the mainboard, but I'm not sure what to look at there. Any guidance would be appreciated.

Mainboards are harder unless you can find the schematics or service manual for it. You could try searching online for "(insert mainboard 'board number') schematic" and hope that there is one available online. If it is a newer model this is less likely though.

The other possibility is that it is a firmware problem (which is on an eeprom on the mainboard anyway).

Unfortunately it doesn't state on the support page for the TV if it is possible to load the firmware without going through the TV menus, although I did find this procedure for another model which although it shows that you have to use the menus perhaps they may still work when the USB option is loaded

A lot of TV makes including Samsung allow you to load the firmware via USB by downloading and copying the firmware (usually a .bin file but may be different) to the root directory i.e. not a sub folder of a USB flashdrive and then inserting the USB into the TV and turning on the TV. Part of the normal boot up sequence is to look for a USB file with the correct file name and then if there is one there install the file from there and restart the TV. Normally this occurs very early on in the boot process. If the correct file name is not there then it proceeds with the boot up of the TV

I am thinking that if the firmware was corrupted that usually this part of it is safeguarded to allow for a re-install.

As I said it isn't mentioned for your model but you never know. If it does start to load etc, allow some time for it to install and configure etc and also for it to restart i.e. be patient ;-)

If you can't find a schematic and IF the firmware doesn't work as described above etc, then you may have to replace the mainboard.

I ordered a replacement mainboard before I saw your reply. It came today and I swapped it out, but I still saw the same issue. My guess is that a different mainboard with the same issue rules out a firmware corruption, though I suppose it's possible that I got a second board that already had the same, or similar, issue (it is a refurb, after all).

In any case, I plugged in the firmware-loaded USB drive and powered on the TV; it seemed to just power-cycle as expected, without taking the opportunity to install firmware from USB, but I let it go a while. I called it off at 15 minutes of no change.

I noticed in one of your links above that there is a way to flag the TV to install from USB at boot, but Samsung's own link for that isn't working. However, I gathered from the link below that I might be able to just create a blank file called SWU_AUTO_FLAG at the drive root - I'll try that next and report back.

I should also note that, while working on the TV over the past week, I've been using a different outlet and circuit than the one where I originally encountered this issue.

If anyone has any other ideas, I'm all ears!

Hi, any update for this issue? Fix or no fix?

Normally, most TVs will power up after a few seconds of turning on power to allow the PSU to stabilize. When the relays activate, if there is a problem with other powered circuitry, as in an abnormal load, it will then shut down and start the power cycle again. Disconnecting a cable would point to the board that has a problem. However, if that board is connected to another circuit the problem might be in that circuit. This follows Brandon’s find of burned resistors off the main board. Replacing the resistors will not solve the problem until the cause of the burn is found. A schematic will tell you what the resistors power, and of course, if the resistors are burned only a schematic will tell you what the value is.

Otherwise, it is replacing parts till you get results, which can become more costly the a new TV.

I have been working on a 75" Samsung UN75RU8000FXZA that is in eternal boot loop. Removing power from mainboard allows all LEDs to light normally (LEDs good). Removing ribbon cables from mainboard (TCON and mainboard now in a single board) allows TV to boot- I can hear the boot sound and TV stays on. Tried a replacement mainboard with the same results. Upon digging, it looks like part of the display is faulty, causing the boot sequence to stop and try to restart upon an error. I will try to isolate whether its the left side or right side of display. From video I found online - you can then slide plastic under parts of the ribbon cable to try and isolate the bad section of display but still allow it to boot. From the video I watched- the tech suspected the chip-on-film going from buffer board to display has gone bad on one section of the display.