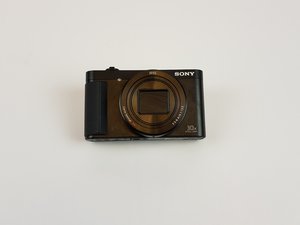 The Sony Cyber-shot DSC-HX90V is a point and shoot camera made and released by Sony in 2015. Compared to their competitors: Canon, Nikon and Panasonic's 30x compact camera; the HX90V is noticeably smaller.

Camera will not turn on - Completely dead

Has anyone had a issue with the Sony DSC-HX90-VB not powering up?  The camera is just 16 months old and is a great little camera when I don't want the bulk of a dSLR but a few days ago whilst on holiday, I took 2 photos, turned the camera off, put it back in its case and then when I went to use it about 30 mins later, there was nothing.  I assumed the battery was dead so replaced it with a spare I always carry, but nothing.  I have tried charging the camera (you get a very faint barely visible orange light), charging the battery in a separate charger and have left the battery out for 24 hours to reset it.  The camera is still dead.  I even bought another battery in case I had 2 duff ones but still nothing.  The camera had no kind of knocks and the lens is fully retracted.  It is just completely dead and wont fire up?  Any suggestions?

You can get the service manual for the DSC-HX90 and DSC-HX90-V. It may or may not have information relevant to your DSC-HX90-VB.