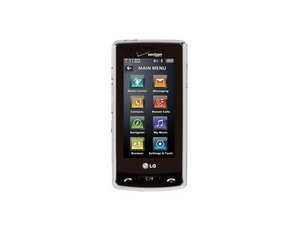 The LG Versa (VX9600) is a mobile phone for use on the Verizon Wireless network with a full touch screen and onscreen QWERTY keyboard.

The phone will not function past the opening screen when plugged in?

The bottom outside of my phone got wet in my car and it shut off. I dried the phone with a rag and plugged it in. The charging screen came on (it already had a full charge from the night before) so I attempted to turn it on. The opening screen came on followed by the verizon logo then it flickered and settled on the logo again. The battery itself no longer works (the phone only comes on when plugged in, but I want to know why it won't progress past the logo screen even when plugged in.

HEY! I followed your advice and I got the phone to dry out overnight. It works now! Strangely... the battery also works now too. Perhaps whatever was shorting out the phone was affecting how the battery was transferring (not sure of the technical term, sorry) energy to the phone. All is well now! Thanks for your help and patience!!

Amber Jones, just follow this guide and once you have done those steps, you can continue to trouble shoot. Half the battle is the battery....good luck and let us know how it is going.