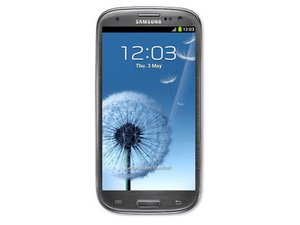 The Samsung Galaxy S3 is a multi-touch, slate-format smartphone with eye-tracking ability, increased storage, and a wireless charging option.

Water damage after put in washer

Took out the battery and left it dry next to a heater for couple hrs.

Put it together, didn't turn on so thought out of battery and plugged the charger.

Then heard buzzing/cracking sound from phone while charging so unplugged

Waited for some more time (overnight)

Then, no sound when charging.

Turned on just fine, can do everything except for camera not working and no sound at all (doesn't work with earphones either, check volume and airplane mode)

Seen the alcohol solution someone else got. Would that fix the camera and speaker problem? I think something might went on when I charged the phone.

I dropped my S3 into water, it got fixed but my camera wont open on any apps that use it. My speaker is also sounds weird what do i do

my baby pee on my phone. and i turn it off... aftr an hour i open it again and then my screen not working anymore, i try to reformat or hard reset but still not working. any idea pls. thanks

My s3 got water damaged about a year ago sound,speakers,mic,aux, dont work it often says earphones are connected when they aint the phone was lagging but now ok just need advice on how to get sound working could i risk takeing the board out and place in alcohol then leave to dry any help would help thanks

Your first mistake was plugging the phone in to charge. That might have fried several components on your phone. You should have just opened the phone, placed in a container with rice and let dry naturally for 2-3 days before attempting to turn the phone back on or charging. Now, that these essential steps are no longer viable, try some damage control. Open your device and tear it down completely and clean with alcohol and soft toothbrush. Pay attention to areas with corrosion and clean that. Take your time and clean thoroughly. Let phone dry out naturally,

don't use any heat to dry the phone. That does not help, only makes things worse. After reassembling the phone keep your fingers crossed and hope that you have not cause permanent damage to the phone. Also, I can almost certainly guarantee that you are going to need another battery.

Yeah, man. That's a bummer. I had gotten a waterproof case for my s3 a while back. I was out by the pool and I had mentioned to my 9yo niece my case was waterproof. My 5yo nephew didn't believe me. So naturally, I give it to him and say "throw it in." I had been using it in/near the water all day, and no problems. Turns out when it hit the water, it hit at such an angle that the earpiece membrane was pierced by the pressure.

Here's the crazy part. I didn't even notice. It remained powered on and waterlogged for over an hour before I went to use it and it wouldst register touch (due to water in between screen and screen cover of case). I turned it on and off TWICE in this state before it dawned on me that it was full of water. I turned it back off immediately, and then did this:

(Note: This happened to my s3, but this is generally the best path of action to take with any phone that comes in contact with water)

I used this method two more times to acquire replacement boards, never had an issue. I would highly recommend going about getting a new board this way as opposed to getting bent over a barrel by some !@#$% on ebay. The only thing you need to be careful of is The boards ESN status. I myself am familiar with migrating ESN/MEID and the software it requires. I always moved over a good ESN of mine right away regardless, so whether or not the board I was buying had a good or bad ESN didn't matter to me. For someone unfamiliar with all that, I would recommend verifying the ESN prior to exchanging any money. The ESN/MEID can be found on a sticker behind the battery. You can call the applicable carrier and ask them to verify the status of the serial number for you.

This is long, I know, but hopefully someone will have the patients to read it and it'll help a bit. The most important thing to do when your phone comes in contact with water is to immediately power if off and remove the battery. Once that's out of the way, the second most important thing is taking your time. DO NOT rush. If the phone has any hope of survival, it must be completely and entirely bone dry on the inside before you attempt to power it on again. I got crazy lucky, my phone should have been toast. The cameras being the only casualty is just crazy, and I have no real explanation for it other than dumb luck.

I have a galaxy 3 (I think it this should work for other android devices too.) Anyways. dropped my phone in a toilet while changing a couple days ago. As soon as it fell in I got it out. And dried off the screen and (this is gonna sound weird.)

the first thing I did was: I started sucking out the water from the headphone jack , volume buttons, power buttons , homescreen button , speaker and lastly micro USB port. The second thing was: I made sure water didn't get on the battery and dried the inside. The third thing was : I made sure the speaker was working. It did. *if the speaker doesn't work make sure you sucked all the water out of it* but my galaxy works the same. Maybe you should try this. Thanks for reading! c:

Hello, the same thing just happened to me. I phone fell into the toilet a few minutes ago . It was in for about a second. I took it out and dried it. When I turned it on, everything worked; however, my speaker just stopped working. the phone believed earphones are connected? What should I do?

I had my Galaxy phone wet for 45 minutes or more. Took the back off and layed it on a paper towel. Poured a 2"to 3" layer of bagged white rice into a flat container then placrd the phone, back cover and case on the rice. Pour the rest of the rice to completely cover evetything and let it sit overnight. Carefully remove phone placing on paper towel. To finish blow cool air to remove small articles of rice and powder. I used my hair dryer set on cool but its best to use the same can of air used for cleaning dust particles off your pc. The speaker was crackleing in and out the next day so I repeated the same procedure that night. The rice pulls out moisture and you may need to repeat the rice method. It work for me. I also removed the SIM card on the second try so all the connecters could get dry. Also, right after I found my phone soaking and before I could get it dryed off I received a call which made me worry about the wet circuts but, my phone survived after a few days eveything was working great.

Yes, rice. It's the most frequently used method for saving mobile phones after a brief swim. Dry and highly absorbent, plain rice draws moisture out of phone openings. Operative word being "brief". A fully water logged phone is probably better left to the immediate care of a skilled technician. Not poor advice, @oldturkey03, rather very common fix.

You probably need to replace the camera and speaker. Those typically can't be repaired and are frequently replaced when we do water restorations on phones in our stores.

Son jumped into pool with phone in pocket. They took battery but did not totally dry it. My other son has an old broken S3 so I took the mother board and speaker section and replaced it and now it works. Thanks for the info, saved me at least 100 bucks in repair cost.