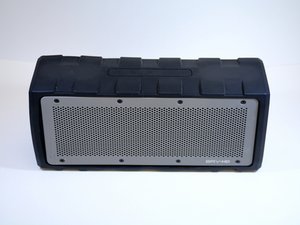 Bluetooth capable, waterproof, and shock resistant speaker released in March 2015. The Braven BRV-HD is identified by the model number BRVHDBG.

Type of socket for charging

My dog ate my charger and i need to buy another. I would like to know the type of socket and adapter i need to purchase. Would a kit like this work?

I don't think that the adapter you linked will work as it won't fit properly into the power outlet as may be used by the OP.

This is a guess but the OP linked a supplier with an Australian website address and here the power outlets are 3 pin and although 2 pin plugs i.e. no earth requirement can be used, the top two pins are angled in and not straight as in the USA.

If you click on the link posted by the OP you can see the plug pins on the adapter are angled whereas the one you linked are straight.

Yea, I saw that OP's link was for an Australian based store. It was more suppose to be an example of what specs they're suppose to be looking for when getting a plug. They just need a 12V adapter with the Type I plug.

Appreciate the assist on this one though! Always a pleasure

Thanks for the link, @jmehnert. Unfortunately, @jayeff is correct. I also can't get the product you link delivered to Australia.

I will try to find something with the type I plug that can ship to my address.

Thanks for your help!

They have lots of stores and authorized resellers Australia wide Maybe there's one close to you and if not, they ship as well;-)

Be aware that the plugs that come with this adapter, look like they're reversible.

Mostly with adapters that have removable plugs it is marked on the plug and also the connector which is connected to the adapter that it plugs into which is +ve. So make sure that +ve matches +ve when you plug in the appropriate plug to the adapter. This means that +ve will be on the centre connector.

Here's an image that shows where to look on the plug and the plug connector. Also the colour that denotes the size of the plug. 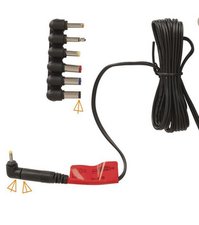 If you connect a DC adapter to the speaker with the polarity reversed you could damage the power circuit in the speaker. So be careful and double check that the plug is connected to the adapter around the right way!

Usually the device that is going to be powered states what the polarity of the voltage is that is to be connected e.g. +12V, next to the power socket and this means that the +ve is on the centre connector of the plug. See link for polarity symbols.

At least the plugs are colour coded so that you know what their size is by just looking. You'll probably need to use the one with the black colour insulation on the end of the plug barrel as 2.5mm is the most common size used for DC power plugs/sockets.