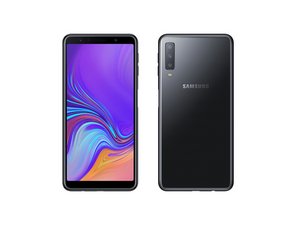 The 2018 version of the Samsung Galaxy A7 smartphone released in October 2018.

Problem with white dots on the screen in Galaxy A71

White/grayish line appear across my screen and one or two smaller dots around it. Its very visible when you are on a app with a dark background, such as my home screen or google. When on a white screen such as the interface of ifixit, you can't really see it.

The following it just to determine if it may be a software problem or if it is a hardware problem.

Try starting the phone in safe mode and check if the problem is still there.

If it is not there then a downloaded app is the cause of the problem. You will need to uninstall the downloaded apps, one by one and test the phone in normal mode until it tests OK. When it does test OK the last downloaded app that was uninstalled was the culprit.

Be aware that a factory restore (aka factory reset, hard reset) will erase all your data and downloaded apps. It will restore the phone to its’ default or last system updated operating system, so backup the phone to a computer or the cloud, using the phone’s backup feature, before performing the reset.

Once it has been reset to factory default check if the problem is still there.

If it is still there then there is a hardware problem. The phone would have to be opened and the problem further diagnosed, most probably by temporarily replacing the screen to check if the problem is a screen problem or a systemboard problem.

If it is not there then using the backup that you made earlier, restore the phone using the phone’s restore feature.

Once the phone has been restored to what it was, check that it is still testing OK. If it is then the reset has resolved the problem.

I had a Samsung galaxy tab and it has the same problem on black stuff. The solution is, press the power button for 2.19 seconds then hit restart and click it again. That dosen’t work, though.