Is my SMC dead?

My late 2011 MacBook Pro has come to an end. Even if right now is perfectly working when plugged to the charger.

After shutting down, due to a completely discharged battery, I plugged the MagSafe in and try to turn it on. Nothing happened even after resetting PRAM and SMC.

Once the battery discharged completely, the system shows a crossed battery symbol. Now battery is not recognized and in order to turn on I have to do the reset SMC procedure.

During this procedure the MagSafe charger remains Green without changing to Amber.

I also downloaded MacsFan control and the result is that “No fans detected on this computer”.

Is my SMC dead? Is there any way via terminal to detect if it working or not? Shall I try and replace the SMC?

I have seen from this similar post: Cooling Fan running constantly/not detected by Fan Control Apps. There someone suggested a PRAM battery replacement, Can this be applied to my late 2011 model?

Thanks a lot for spending your time reading this. I hope someone can give me a solution for this problem! 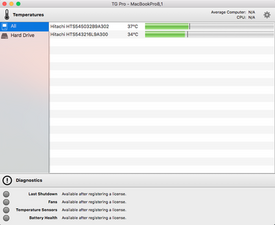 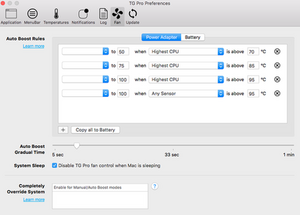 How about installing this app CoconutBattery paste a snapshot of the main window so we can see whats happening with both your battery & SMC logic. Adding images to an existing question

It sounds like you have a faulty charging circuit from your description and the basic troubleshooting, but unless we plug into your Mac a different known good battery there’s no way to tell, you might simply have a faulty battery that can extend its fault to the logic board when plugged in place. If you had a SMC issue it would probably give troubles even with battery unplugged but if I understand right without battery the Mac runs fine. SMC don’t go bad so often unless there’s water damage and from a technical point of you replacing it without testing makes no sense. There’s no Pram battery in your Pro model.

I actually had the chance of testing with another battery which worked fine in another mac but it wouldn't charge in mine. So i guess it is a fault in the charging circuit.

I might have a deeper understanding by a little research and see how to replace, if possible, the charging circuit.

what about the constant fan on? will be fixed too once i solve the alimentation problem?

@lumusca Hard to tell for sure, but there are chances the fan misbehaviour could be related to the main problem. I wouldn't worry about that though, if you manage to fix the charging, fan can also be controlled by a third party utility.

Did you also run TG Pro on your system? What does it show?

I'm suspecting you have liquid damage. How about pulling the logic board out and do a full inspection looking for corrosion or staining. MacBook Pro 13" Unibody Late 2011 Logic Board Replacement If you see something off post a good pic so we can see it.

Use a small soft paint brush to scrub the logic board and other parts of the dust build up and use a can of can'ed air to blow it out.

Yes i have tried the TG Pro but again no fan is detected and I can't control it manually. I will have a closer look to the logic board and see if there are any element of water damage.

@lumusca - Can you post a snapshot of the TG PRO'S main window so we can see the other sensors.

If PPBUS Voltage is 12.56~ and you have 3.42V on SMC RESET unlikely. If PPBUS voltage is 12.23~ check SMC RESET voltage. You should have 3.4v. If you dont, the SMC may have crap under it or the Reset chip isnt working.

Luca - Yes your SMC logic has issues! You really need to take your logic board out to inspect things. If find this is a bit much for you, then your only option is just replace the logic board your self or bring your system to someone who has the skills and tools to diagnose things at the component level.