Is there a good way to test if its the inverter board or logic board on a macbook pro that is stopping the backlight, without purchasing a new inverter board? My computer works great, just replaced the entire screen assembly but no backlight now, im pretty sure the inverter board may be bad but wondering if something else may be wrong or disconnected that I could look into. Thanks!

Okay, I know I am the last person on here that should say anything regarding those Mac's but since I am on here I got somewhat intrigues by the Apple secrecy and can almost say for sure that it is almost impossible to get any of the pinouts or specific data online. I am certain it is out there but a well kept secret. I hope lemerise has the inverter circuit etc. that would be awesome for my collection as well. Anyhow, not to bore you and never questioning lemerise or mayer's superior knowledge on this topic, have you take a look at the service manual and checked on the fault finding section? I am not sure if I have the right manual so take a look at the image and see if that looks like yours. It does come from the MacBook Pro mid 2010. I do not mean to post this as an answer, but do not know how to attach pictures under comment. 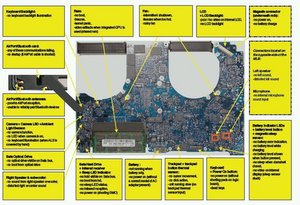 Hi oldturkey03, thanks for your answer on this subject. Yes it's really hard to find technical info about Apple products, I guess it should be brought by users like you and me. That why I posted a request on iFixit Meta for a page where the user could learn how to use measure equipments (volt meter, multimeter) and voltage values of the more problematic electronic Apple parts like the DC in boards, inverter boards, etc. I hope that the real electronic geeks will contribute on this.... This would help a lot to troubleshoot parts and save a lot time.

you guys definitely helped a lot and gave me a lot to look for, i found a clue that may help. my screen is definitely good, however in order to get a backlight i must short the blue and red wires of the LCD driver/inverter plug on top left of the motherboard. any indication why i would need to short those two wires (while testing with multimeter i accidently shorted them and backlight turned on) to get this thing going? is the DC board bad? thanks

I doubt very much that this group of techs would intentionally short out a board to test it. How about if we try to give you a conventional diagnostic? Could you describe your symptoms?

i didnt do it intentionally, i did it accidentally while testing to see if i was getting any voltage from the plug at all, which i am (5v). symptoms are no backlight on the LCD regardless of brand new LCD screen that has been verified working. everything else functions correctly. i tried everything else, replaced the LVDS cable and inverter/driver cable, yet nothing. so while testing voltage, crossed the path between the multimeter and wala, backlight....

Did you replace the inverter? Can you see the desktop darkly?

yes teh desktop is dark, computer works and functions fine just no backlight, i have not tried the inverter yet (i assumed after i got the backlight to work AT ALL that it wasnt the inverter). maybe i will find someone to test that with, but i assumed it wasnt an issue since the screen works atleast under these circumstances.

Being able to see the desktop darkly indicates a failed inverter or inverter cables. Check the cables and their connections, that failing replace the inverter.

cables and connections are 100%, have tried spares that i have with same result. inverter has not yet been tested, however since i got the screen to work (by shorting this) i ruled that out as well, however maybe i should not have, and will test that next.

Saw this on another site - the pinouts match my A1211 Macbook Pro inverter feed plus.

This problem is solved... sort of. The bottom line was that the logic board was NOT outputting any voltage for the "dim control" input to the Inverter board. According to some other info found on the Internet, the "dim control" pin should have a voltage ranging from 0 to +4 volts depending on the dimming desired (where 0V = no light, 4V = max light). Since the logic board wasn't outputting any voltage on that pin, the backlight remained off. So, since I had no intention of buying a new logic board for such an old computer, I decided to just manually put +4V on the pin. Here's how I did it...

First off, the CORRECT pin names and voltages to the input connector of the Inverter board are here (again, this is for Powerbook G4 17" Aluminum). This is slightly different than what I wrote in my original message...

So, it was the DIM CONTROL that was dead from the logic board. I had both 12v and 5v available to me at the input connector to the Inverter board so, my first thought was to just connect the 5v to DIM CONTROL. At first it worked but, after about 1 minute, the backlight would shut off, presumably because the Inverter was being "overdriven" and it has some kind of overcurrent shutdown circuitry. So, I went to plan B and, though experimentation, found that a 3K ohm resistor placed between pin 4 and pin 5 brought the voltage on the DIM CONTROL to +3.8V which kept the backlight bright without it shutting down. See pictures below.

Now, for the bad news. Not only will the screen not dim (which I can live with), but it also won't shutoff when going into sleep mode (the display goes away, but the backlight remains lit). For the record, it DOES shutoff when the computer is ShutDown. But, this poses yet another challenge. Since I generally only use my computer from home while it is plugged in, I may not worry about this one for now. But, for many people, this might be a showstopper. None the less, I did get the backlight working.

What I did was take a lamp from another broken laptop I had and used it as a tester to see if the inverter was okay.

That did it for me - you can not test the inverter output with a digital meter.

I understand that this thread is old, but still, worth a try.

I have finally disassembled my Macbook Pro A1211 and fixed "couple" of things:

1. Made my DVD work - was dead - probably distorted after fall, ended up leaving one screw out - and it worked.

2. Cleaned the air ducts and replaced the thermal paste on three chips - now normal temperatures are <50deg C, while they were >80deg C ever since I bought it new.

3. Removed the cover - so that I see the screen with ambient Backlight :) - for the situations when external monitor is not enough. :)

I would like to say big thank you to ifixid - without you - all that would be impossible. Now, I come to the question..

I had my backlight come off and then on several times, but once, it made some smoke and smell, and went off for good.

I do not have any replacement parts yet, but that's what I found so far:

The pins going to inverter:

So, my question is - can someone say if I should measure 5V even with Inverter board disconnected?

If yes - then where should I look for defects?

Is there any fuse that could have been killed with dead inverter board?

Other than dead backlight - laptop seems to be fully functional.

The smoke was coming from the left part - in the area of speaker, as far as I remember - well, it's couple of months back.

I did test the output as described elsewhere with the high frequency Hz detection. There's no output, but I guess it can be because the inverter is dead or because the power input voltage is too low.

But my question is rather about the power to the inverter, i.e. that lower than 5V value. Anyone has ideas why it might be and how to troubleshoot it?

To Roman: Check continuity at Fuse L9450 on motherboard next to connector for inverter. https://www.youtube.com/watch?v=aGK5PqbY...