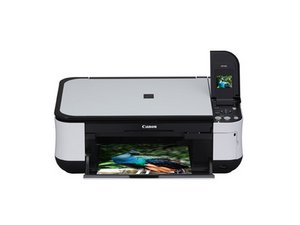 The Canon Pixma MP480 is an all-in-one color inkjet photo printer released in 2008.

printer is printing a double image

My MG 5620 has developed poor print quality. It is like a double image -- perhaps there is a problem with the alignment of the ink-jets?? I have tried running the cleaning procedures and changing the ink cartridges. But that hasn't helped. I do not want to trash it -- if I can do something to fix it. Please help! Thanks!

Did you do a printhead alignment - scroll to p.193 to check if this resolved the problem? You didn't say.

I have the same problem on a Pixma MG5450 and have tried everything - cleaning, deep cleaning, auto print head alignment and manual alignment 3 times. Any ideas? I'm keen to fix it rather than just throw it away

Try using it on another computer to rule out a driver issue. If it double prints on another computer, you have a hardware issue. It would be nice to get a photo of the problem as well: Voeg afbeeldingen toe aan een bestaande vraag

If it’s just the driver acting up, you can fix it by removing and reinstalling the drivers. Make sure to use the ones online from Canon and not the CD, since the CD is never up to date when the printer is sold. If it’s a hardware issue, you’re going to spend more trying to fix it then it’s worth, so you’re better off getting a new printer.

It may be possible to fix it, but usually when you have an issue like this it’s generally serious and needs expensive parts to repair.

Also PS: Do yourself a favor and find yourself a nice HP or Brother mono laser printer, unless you genuinely need color. Inkjets only make sense if you print photos.