The Apple iPhone 5c was announced on September 10, 2013. Repair of this device is similar to the previous models, and requires screwdrivers and prying tools. Available as GSM or CDMA / 8, 16, 32 GB / White, Pink, Yellow, Blue, and Green.

After changing the screen on an iPhone 5c the proximity sensor does not work. After noticing it did not work I took the phone back apart and repositioned the front camera and proximity sensor. After a hard reset it still does not work. The front camera flex cable has no tears so I assume the problem lies on either the screen not allowing enough light or ... That's why I post this question on this forum. Is there any simple troubleshoot like before on the iPhone 4/4s? Is there anything I'm missing that is simply over looked? I examined the original apple screen around the proximity sensor and it matched my replacement screen. I am simply asking for any tricks or tips from others who have encountered this problem..

the unit next to the camera that detects when you put your face up to the device when making or receiving calls, it turns the screen on and off when it detects or does not detect your face

Hi guys, i've have just found this site explaining some kind of solution to the proximity sensor issue on iphone 5c/5s. Am going to try this this afternoon i will let you know if it works.

Hi Luis, did this work?

The issue of the proximity sensor not working properly with a new 5S or 5C screen is the single biggest headache for me at my shop right now. This issue first cropped up for me in August. Prior to that I had no issues with the proximity sensor not working with replacement screens on the 5S and 5C. And yes, I'm positive that there were not issues prior to that because it is one of the functions I check before and after every single repair. I was using Apple N' Berry as a supplier for 5S and 5C screens so I switched to Wholesale Gadget Parts. Initially, this was effective and the problem went away, but it has since resurfaced. Here's what my countless tests have concluded:

I only see the problem on black 5S and 5C screens, not on white 5S screens.

Sometimes a pre-installed frame or hold (as it's called on the eTech Parts site) is the problem because it's position is off or because it's slightly too small. If it's too small and the proximity sensor isn't sitting extremely close or making contact with the screen, that can cause it not to work. Sometimes you can remove the frame other times you can't because there's too much glue under it. You also have to be careful when you remove it because it's easy to scratch the black paint off.

The rubber frame for the light sensor being in place properly, does not solve the proximity sensor issue.

The little white square light filter that sits under the light sensor should probably be moved from the original screen to the replacement screen. I always move it so I can discount it as a possible issue with affecting the proximity sensor. Does it really matter? I think it probably doesn't from my tests.

Very often when you test, if you leave the temporary screen protector that came with the new part in place, the proximity sensor will work fine. If you cover it with your finger without the screen protector in place, it will work fine but when you put the phone up to your ear with out the screen protector in place it does not work or it does not work 100% of the time. This makes me think too much light is getting in to the sensor and causing it to not work properly. This then leads me to try coloring in the purple filter on the screen which as I said above, has yet to work for me.

The only thing that works for me is to pre-test every single screen with an original proximity sensor part and send back any screens that don't work before I get to trying to use it for a repair. This is horribly time consuming and I just can't always do it.

Both of my these suppliers have basically told me I'm the only person in the world who has this problem. I've complained more than once to each of them and they have told me that no one else has reported the issue. People either aren't testing, aren't complaining, are living with it, or the suppliers are lying. This is really frustrating.

I don't think the suppliers are going to correct this issue so it's up to us to find a work around that works 100% of the time. I hope one of us finds one soon.

This is frustrating to the consumer too as I just paid to have my screen replaced and my phone now automatically goes to speaker or facetime when I am in the middle of a call! The place that replaced it told me that the phone needs a hard reboot! I'm 99% sure this is a hardware issue and NOT a software problem!

I don't know if this would work, but is probably worth the try. I know on the 4/4S you could use a sharpie to black out the proximity sensor to get it to work in most cases.

I have had the same problem in the iPhone 5s , when i replaced the screen, I didn't pass these two little parts shown here onto the new display assembly , and the proximity sensor didn't work afterward. One of these little plastic parts is the front camera lens, the other is a little bracket meant to hold the proximity sensor in place. You may need a heat gun to heat the glue to get these little parts of your old assembly. 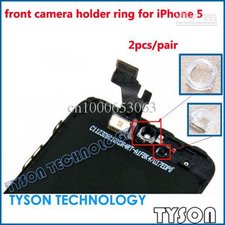 Never had this problem with 5c why don't you try the camera flex cable in the old display if you can and check if it works with the original glass. If it doesn't you no that it's gotten damaged somehow

I have noticed the same thing. It can be one of several things, but I have not been able to pinpoint which one.

1. I know that the (I think) ambient light sensor is ripping off of the cable when I am removing it from the old phone. This could be causing a short.

2. The other thing that could be causing this (more likely) is a little white rectangular piece of paper/plastic (?) that needs to be transferred from the old front to the new one. I think this does something like filter the light through the right way. I have noticed it makes a difference, but doesn't always fully fix it.

3. Finally, sometimes scratching off the paint on the pinhole of the screen allows more light to come through, but this is also hit or miss.

Sometimes putting the phone back together with a shattered front on it allows it to work again. This leads me to believe that the fronts are defective. I'm interested in hearing more from other techs working on these as well... really weird issues. Proximity has always been a problem on the GSM 4, (sometimes CDMA, very rarely 4S). I saw it pop up again on the 5/5s/5c fairly often...

Out of all the iPhone 5 and 5c I have never had 1 issue with the proximity. Now some phones I have replaced screens in had screen replacements before by another repair guys and left out the little filters for the 5c and brackets even still the proximity has always worked even without..

It might be the glass that's the problem from your supplier

I suspect it'll be because the little black rubber shroud that sits over the proximity sensor has fallen off when you did the cable transfer.

I had a client phone come in the other day and I noticed it was missing ( from a previous repair ) and asked if they'd been having issues, and they have, with poor face-presence recognition and similar.

To date I've not yet found a supplier of replacement units.

Paul, How does the rubber fit over the sensor. Mine fell off and I can't figure how it goes back in place. There is a round circle side of the rubber that I guess goes toward the camera. Any advice or picture would be appreciated....Thanks, Joe

Paul, Thank you for the photo it is exactly what I was looking for to confirm the replacement of the rubber.

There were tiny glass shards on the camera and I was wiping off that area lightly with a small soft brush. That is how the rubber shroud fell off.

Same here man, about the only replacement part I have yet to come across. If you by some chance have found a supplier could you please give me the link, would be much appreciated

I'm still relying on scavenging them from destroyed phones (water damaged usually). What irritates me is that most of the phones that are missing this vital shroud have just had their screens replaced by the "quick and cheap" kiosk repairers locally. Seems they either don't care, or are accidentally discarding them (they also don't bother with the camera or sensor plastic guides - saves them a minute *sigh* )

after trying several different fix it resolutions, i determined the issue could not be resolved any other way than replacing the screen, so i switched out the screen with a new screen and viola! the proximity sensor works! problem solved.

I had the exact same problem before. I fixed it by taking apart the phone and making sure the gold plug fits perfectly in the rubber groove it goes into. If that is not in, the sensor will not work. It is a pain to do but after it usually always works.

just switch out the sensor, its not he glass. The solder connection to the sensor is very weak if you extract prox to firmly it will disable the the connection. if you in NZ buy a replacement sensor here Synced Repairs.

hi there. there is a fine solution.

9.and then select lock screen

OK guys here is the FIX it works for me every time (for the 5C) Look at where your proximity sensor will sit on the inside of the screen, take a screwdriver or something with a pointy tip and scratch the paint off this little area making it clear or see through.(NOTICE:ONLY SCRATCH OFF THE PAINT WHERE THE PROXIMITY SENSOR TOUCHES THE SCREEN) Put it back together and test by making a call if it didn't work you need to replace your front camera flex. feel free to ask any ?

HELP!!!!!!!! I am an old lady and having this issue. I did crack my screen and had it replaced at Office Depot. Exactly where is this proximity sensor and how do I remove he screen to scratch paint off? And what does "jailbreak " mean? I am sorry, but I can not afford to take my phone to be fixed but this beeping every time I try to have a call is making me crazy. I swear it makes me so embarrassed I want to cry.

I would not suggest trying to do this yourself, just take it back to the store you got it repaired at and they should take care of it for you. Almost every repair shop should give you a warranty and this should be covered under warranty

CORRECT FIX!! On the original screen, there would have been a white square sticker that you are meant to swap out when changing screens, on all black iphone screens i might add. Its about 2mm x 2mm in size. If you have lost this then you can use PTFE tape. just cut 2mmx2mm square out witha scalple .