How do I troubleshoot logic board

When I power up my iMac A1195, all the fans run at top speed and there is no video...black screen. I have tried another lcd screen, same results. It does the same thing even when memory is removed, so I suspect the logic board. Any tips or guides for testing the logic board?

So, I received the replacement logic board today, installed it, and now the iMac starts up as expected. I still have a video problem, but that is because the replacement LCD screen I ordered is bad. At least the old one still works now, multi lines and all. So somehow I must have injured the logic board when I originally installed the replacement LCD screen. I am definitely more careful handling all the parts now. Learned a bit about troubleshooting iMacs, so thanks again for all the communications. Guess I'll close this post. Thanks. Ron

Ron, good job with this question. It was a pleasure and best of luck with your iMac.

Ron, just to help you out with the troubleshooting:"

The iMac (17-inch Late 2006) has three built-in diagnostic LEDs and a front power-on/sleep LED on the main logic board that can help you to troubleshoot the computer.

2. Locate the SO-DIMM slot and LVDS video connector. The three diagnostic LEDs 1, 2, and 3 are located to the left of the battery and under the SATA cable. Note that the LEDs are marked 1, 2, 3 from left to right, as show below. An additional front bezel LED is located in an opening at the center of the right speaker, as shown below 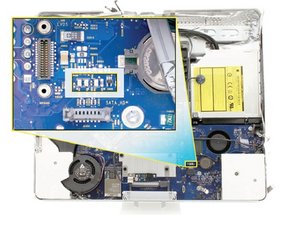 • Indicates that the computer and the LCD display are communicating. This LED will be ON when the computer is turned on and video signal is being generated.

Thank you oldturkey03! I found the 3 diagnostic LEDs hiding under a piece of black tape, just to the right of LVDS connector. This is a bit different from the graphic you provided, but I expect they provide the same function. My serial number says it is late 2006, though.

Anyway, here are the results:

LED1 comes on when the AC cord is plugged in. (normal)

LED2 comes on when I press the power button. (normal)

LED3 does not come on. (no video signal?)

LED4 comes on with power button, dim at first, then bright, and stays on.

So....does this indicate a logic board problem with the video? Any tips for a reset or workaround there? Your help very much appreciated.

I'd hook up an external monitor. If that shows Video, you know that your video circuitry is functioning and the error is with your LCD. If it does not work, than the issues are with your logic board (video circuitry.)

Again, your advice is appreciated. No video with external or internal monitor. Since the fans all run at high speed, there is no startup sound, and symptoms are the same with and without memory, I suspect it must be logic board or video circuitry related....perhaps something heat related since the fans start up and stay at high speed? Do you know if there is a separate video card, or is it a chip on the motherboard for this model? (Late 2006 iMac a1195) I am more familiar with PCs, and there is a video chip solder reflow issue that can cause similar symptoms on those mother boards.

First, I think I have inadvertently started two questions by opening a post specifically for iMac Intel 17". Sorry, I am a newbie to the forum and will be glad to close one of them as soon as I figure out how to do that.

Again, your advice is appreciated. No video with external or internal monitor. Since the fans all run at high speed, there is no startup sound, and symptoms are the same with and without memory, I suspect it must be logic board or video circuitry related....perhaps something heat related since the fans start up and stay at high speed? Do you know if there is a separate video card, or is it a chip on the motherboard for this model? (Late 2006 iMac a1195) I am more familiar with PCs, and there is a video chip solder reflow issue that can cause similar symptoms on those mother boards

Ron, I think if you click on the blue Actions link on the right side above your question, it may giver you some option s to archive that particular question. Anyhow this is what Apple suggest for symptoms similar to yours:"

The iMac (17-inch Late 2006) will turn on, the boot chime can be heard, a white LED appears on the front bezel and sounds from the fan or drive activity can be heard, but the display has no picture or color.

Did the computer wake from sleep?

Check Energy Saver setting to see when the computer has been designated to sleep.

No: Continue to next step.

If y -- our iMac is on, turn it off by holding the power button until the unit powers off. You should hear the fans go quiet.

starting up. When you hear the computer’s start up chime for the second time, you can

let go of the keys on the keyboard

-- If you didn’t hear at least two startup chimes, go to the top of this section and begin

again. It’s important that you hear two startup chimes when performing this procedure.

This indicates that you have successfully reset the computer’s PRAM (Parameter RAM).

No: Continue to next step.

4. Make sure the machine is powered off; power off the machine by holding in the Power Button on the rear of the machine. Turn on the machine. Observe the white LED on the front bezel during startup; it should go out after a few moments. Did the LED go off?

Yes: If the LED went off, this indicates that the main logic board has communicated with the LCD display for video signal and your main logic board should be good. You can confirm by connecting an external monitor and checking to see that you have video out. Go to Step 7.

No: Continue with the next step to reset system power management (SMC).

5. Follow instructions in the “General Information” chapter to reset the SMC. Does the computer display video after successfully resetting the SMC?

No: Go to the next step.

6. Unplug the iMac and remove the SDRAM. Replace with known good SDRAM. Plug the iMac back in and power the unit on. Does the front LED go off after a few moments now?

7. With the LED going off, you may have a No Backlight condition or an LCD failure. In a dim room, turn the display at an angle to you and look closely at the display. Is the display completely black or can you see a dim, purplish light or glow to the display?

Now, I realize you already replaced the LCD, so you are coming close to the logic board being at fault. If the video chip would fail/ have failed the behavior is usually somewhat different. More like distorted graphics, plenty of colored boxes on the screen etc. but it is a possibility.

First hook it up to an external monitor to see if it is generating a video signal. Examine the logic board capacitors (cans) for swelling and/or corrosion. Are you getting a normal start up tone? Did you get any beeps when you removed the RAM?

Thanks, Mayer. I don't have a external monitor cable, but I will get one and give that a try, although I don't think it's even getting to the point of video output. When the power button is pressed, all three fans start up and run at the highest speed. There is no startup tone and this happens even with the memory removed. With memory removed, I should get beeps at least.

Open it up and examine the diagnostic LEDs on start up and let us know what you find. You are correct, it's to early for the external monitor test.

I would "love" to be able to examine diagnostic LEDs, but I have been unable to find any manuals or reference that shows where they are. I have it opened up and can not find any LEDs anywhere. This is a late 2006 model A1195.