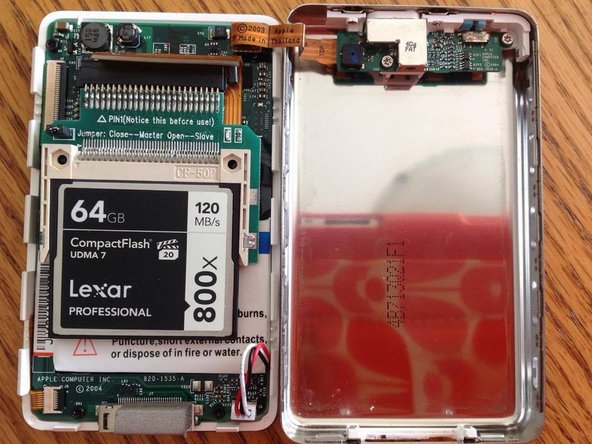 I've had my iPod 4G in a drawer for at least 7 or 8 years. I thought it was a problem with the hard drive, in addition to the battery. I ordered a replacement battery and an IDE to CF adapter, along with a compact flash card.

The repair was easy. I ended up using a small flat head screwdriver to pry the iPod open from the side, not from the top edge as the repair guide shows. I tried it from the top edge first but it was much easier to open from the side. You are basically prying the metal back away from the white front. The original battery was hard to unplug. I essentially destroyed the plug trying to remove it, but luckily did not damage the connector and plugged in the new battery with no issues.

To my surprise the hard drive spun up just fine with the new battery, but I decided to go ahead with the compact flash upgrade because it promised a longer battery life. I used the original bumpers from the hard drive around the CF adapter and everything easily back inside the iPod case.

If you've got an old iPod lying around in a drawer it is totally worth repairing. They are actually made to be repaired, unlike newer Apple devices. I hope to be rocking my retro iPod for at least a few more years!

Did the Ipod software installed automatically?

Which CF adapter would you recommend ?

My questions as well, how do you get the software back on it

The software is stored on the motherboard not the HDD.

A person could put a real on/off switch between the battery an the MB.