Almost a year after the first fateful reports of the flame-happy Galaxy Note7, the Samsung Galaxy Note “Fan Edition” has just made its redux debut. And in case you were wondering—no, there isn’t a tiny fan in there to help prevent battery fires. (We checked.)

The reissued Fan Edition phone is a response to the outcry over the forced recall of these well-reviewed (if dangerous) phones. Before they started exploding, people really liked the Note7. And lots of owners didn’t want to settle for pen-less phone alternatives. Environmental activists, like Greenpeace, also decried the idea of millions of brand-new phones (along with all the energy and resources it took to make them) being destroyed as part of the recall—and they put pressure on Samsung to deal with the recalled phones responsibly.

In response to one—or both—of these groups, Samsung refurbished and reissued the 2016 Note under the Fan Edition (FE) branding (conspicuously leaving the Note7 name out of promotion and labeling). Naturally, we got our hands on one and tore it down.

The “Fan Edition” is only available in South Korea so far—though it could be poised for a larger comeback. But only if Samsung has truly ironed out the issues that doomed the Note7 to its explosively short shelf life.

In the case of the Note7’s exploding battery, the problem was two-fold and occurred in two separately-sourced batches of batteries. Wired’s Tim Moynihan explains:

In the case of batteries sourced from Samsung SDI, there wasn’t enough room between the heat-sealed protective pouch around the battery and its internals. In the worst scenarios, that caused electrodes inside each battery to crimp, weaken the separator between the electrodes, and cause short circuiting.

In the case of batteries sourced from Amperex Technology Limited, some cells were missing insulation tape, and some batteries had sharp protrusions inside the cell that led to damage to the separator between the anode and cathode. The batteries also had thin separators in general, which increased the risks of separator damage and short circuiting.

If you’ll recall, Samsung actually recalled the phone twice—first recalling the 2.5 million-or-so phones with the Samsung-made battery. But when the safe, replacement phones started exploding, too … then the batteries really hit the fan. The limited recall escalated into a worldwide recall, complete with flameproof boxes for shipping the phones back to Samsung.

So, what’d they do to keep that from happening?

Tearing Down the Note Fan Edition

Now, we knew this was going to be a refurbished version of the old phone, but we held out hope that maybe, just maybe, the glass/glue battery sandwich design may have changed just bit. However, after an arduous heating and prying session, the rear glass comes away just as stubbornly as before, again revealing the antenna assembly. 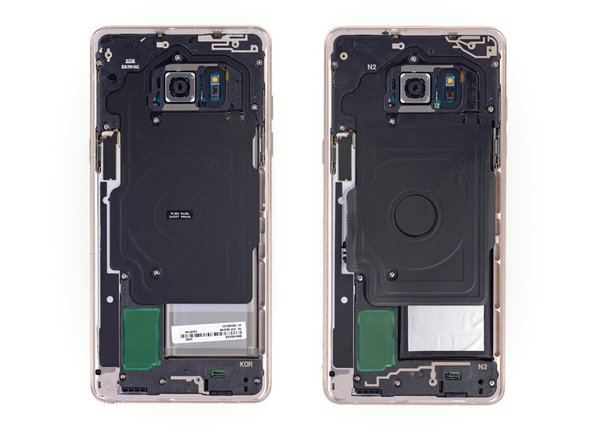 The astute viewer may note the only real difference here is the antenna design, but that’s not really a difference per se. Since the FE was only available in Korea, it has the appropriate Korea-compatible antennas, while our Note7 was built for North America (note the KOR vs N2).

But let’s get down to brass tacks—or rather, silver batteries. The batteries look fairly identical—but there are some important differences. The FE has a brand new battery. The one in our unit was dated June 20, so it’s pretty much fresh out of the factory. And the refurbed phone’s battery capacity is indeed smaller, clocking in at 12.32 Wh compared to the OG Note7’s 13.48 Wh whopper. The Fan Edition’s battery is still glued down in a well with slim margins. No easy pull-to-remove adhesive tabs in sight—which feels like a misstep. A non-removable battery made the Note7 recall particularly messy. So, why double down and lacquer your replacement battery into the phone again? But, I digress. 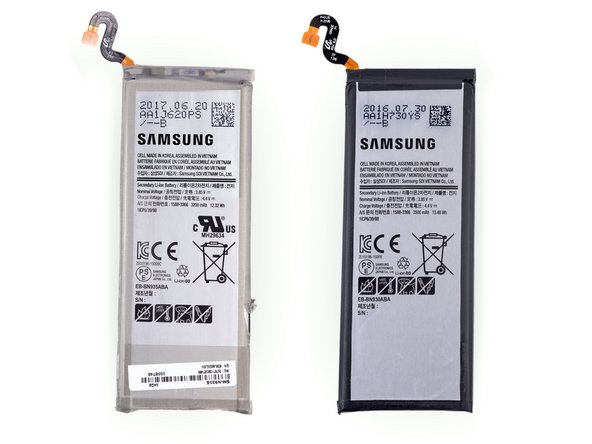 After a lengthy extraction process, we get the numbers that reveal a physical size change, not just a capacity difference. At 45.4 g, the new battery weighs 2.3 grams less than the original, and measures in at 37.4 mm x 97.2 mm x ~5.0 mm compared with the Note7’s 37.9 mm x 97.8 mm x 4.9 mm. The FE has indeed lost some mass (more insulation=less battery=lighter), and the volume seems smaller as well. The changes may well be within the tolerances of past Note7 batteries, but in theory, Samsung has adjusted their curve.

A note about manufacturing variance: Not every battery a manufacturer makes can hit every design spec dead on; there’s going to be some variance. In the case of the Samsung SDI Note7 batteries, this natural deviation was enough to cause some of the edge cases to pass outside the safe operating zone. The solution then is not necessarily stricter quality control, but a shift of the entire spec, so that even the edgiest edge cases still fall within the safe zone. Then anything missed in quality control has a higher likelihood of being safe.

Now, the sample size we’ve analyzed is just one (1) old battery and one (1) new one—so we can’t say much about what the target is, or how much it shifted. Additionally, we can’t say how much the internal structure has changed. But, by our external measurements we’re concluding that the ideal FE battery is probably smaller than the ideal Note7 battery. So any swelling, crimping issues should be mitigated—but size isn’t the only issue at play here. So once again, only time will tell if Note will go down in flames.

Beyond batteries, we’ve got exactly the same phone: no evidence of the rumored processor bumps, and no surprises. So the Galaxy Note Fan Edition still earns (or rather inherits) a 4 out of 10 on our repairability scale. Well, as long as it doesn’t self destruct.

For more imagery, check out the teardown on iFixit.com.

Note7 hardware seems to live up to the hype 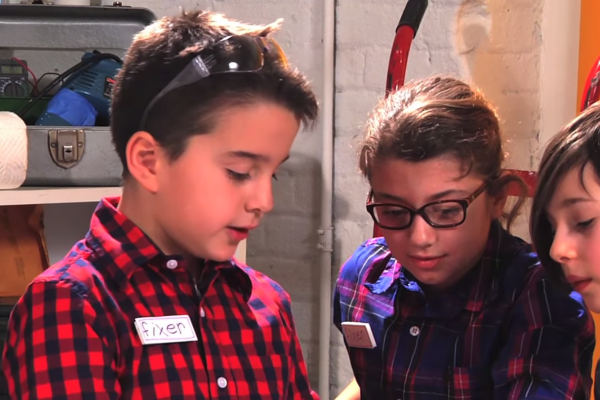 Fan Repair: So Easy These Gradeschoolers Can Do It

Can the Note FE battery be used as a replacement for the Note 7 battery?

Will the FE battery fit and connect in the N7?

I ask because I have an unused ‘new in box ‘ N7 that I kept in hope of finding a battery replacement someday. Is the FE battery it?