We just got our hands on the Pebble (did you notice the subtle watch pun there?), and we couldn’t be more excited. Touted by developers as the “first watch built for the 21st century,” the crowdfunded, customizable watch can do just about everything: remotely control your music, run a growing library of Pebble apps, relay notifications and full emails. It can even tell time! But, here at iFixit, we never take things at face value: time for a teardown.

Smartwatches could very well be the next big thing—even Apple is rumored to be working on a watch of its own. But, as it stands, the Pebble is a completely unique device, and we don’t have a fair means of assessing the repairability of a watch…yet. So, we’ve decided not to give the Pebble a repairability score; instead, we’re going to discuss the Pebble’s expected longevity.

The Pebble is fitted with a standard, removable watch band, allowing for easy replacement and customization. But we were a bit concerned about the finite lifespan of the Pebble’s very inaccessible battery. Due to the care taken in waterproofing, replacement of internal components is nigh on impossible. Granted, a low-power e-paper display and a weeklong charge cycle means the battery will last a while—6 to 10 years by our estimates. But what happens when the timer finally runs out? We reached out to the developers and were happy to learn that they have a recycling plan in the works for when Pebbles pass on.

* What type of hardware is responsible for powering the Pebble? These are the tech specs listed:

* The Pebble is waterproof up to 5 ATM (50 meters or 165 feet), making it wearable while washing dishes, playing sports, and swimming. To protect the Pebble from water damage, the front portion is tightly fitted with a clear plastic frame, and sealed tight.

* The Pebble employs tons of adhesive to keep water (and tinkerers) out. Add in a bezel around the screen, and it’s impossible to separate the cases without compromising the display. 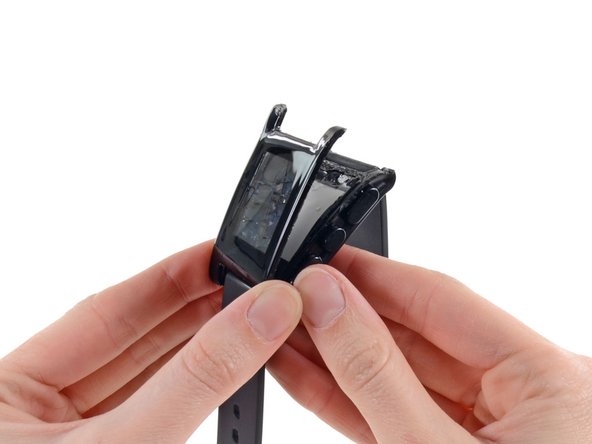 * E-paper, the technology used in many eReaders and now the Pebble, works by suspending tiny microcapsules in liquid within a thin film. Each microcapsule contains positively charged white particles and negatively charged black particles. Adding a positive electric field repels the white particles to the front of the display, while a negative field does the same for the black particles.

* Inside, a single cable houses all 4 buttons, 3 LEDs, and the Bluetooth 2.1 antenna. Replacing an individual component will be impossible (even if you can somehow get inside without compromising the display).

* Like the ribbon cable, three components make up the motherboard/battery/vibrator assembly, held together by very delicate soldering. They will also all need to be replaced as a single unit.

* The ICs of interest on the top side of the motherboard are as follows:

* The backside of the motherboard houses a Panasonic RF module, promising both Bluetooth and Bluetooth Low Energy (BLE) functionality, as advertised by the folks at Pebble. Removing the EMI shield reveals a Texas Instruments chip in the same family as, but slightly different than the one we expected. According to its datasheet, this chip doesn’t support BLE.

* In keeping with the über tight waterproofing, the buttons have gaskets to allow for motion without leakage. If you break one of these buttons, it can be replaced individually from the others; however, you still need to get inside the watch in the first place, a feat we have not yet mastered.

Need more Pebble in your life? See the full teardown. 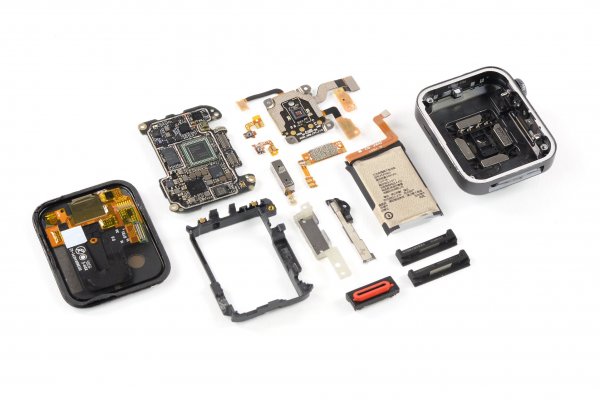 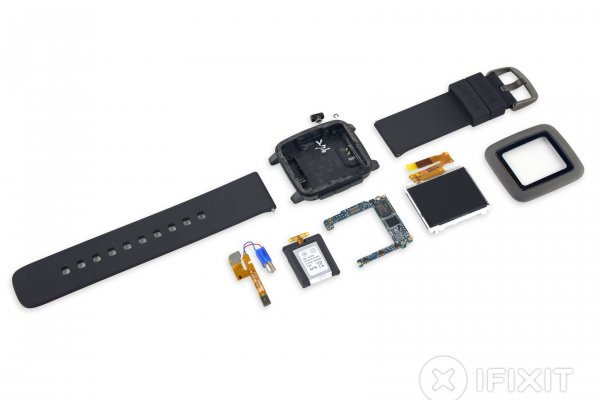