Apple has made a lot of proprietary, anti-open-source business decisions over the last few years: Pentalobe screws to keep you out of your phone, super-strong adhesives to keep you out of your iPad, and repeated moves to block cross-platform development. It can be easy to forget that Apple was not always so closed—and difficult to imagine that they could ever be so open again. But while speaking in Sydney this week, Apple co-founder Steve Wozniak reminded the world of Apple’s open-source roots and called for a more open Apple.

When Woz built the Apple I, his original goal was to create a terminal to hook up to the ARPAnet, and make computers accessible to and affordable for average people. He developed the Apple I in collaboration with the informal Silicon Valley Homebrew Computer Club and was very public about the design. Woz recalls, “Schematics of the Apple I were passed around freely, and I’d even go over to people’s houses and help them build their own.” By connecting to a TV, the Apple I avoided expensive teletype systems. Because the entire Apple I system could be purchased for under $1000, it made computers possible for many more people. Apple continued collaborating with users, encouraging amateur software development—after the introduction of the Apple II, Apple I software was supported through a user’s group. 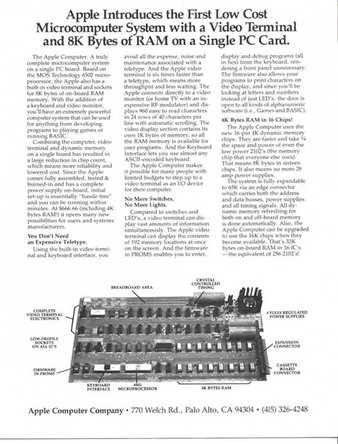 Original Apple I advertisement via AppleFritter

Woz’s interest in open-source projects has remained strong. He provided initial funding for the Electronic Frontier Foundation, which has been fighting for free and open communications systems since 1990. According to a CIO report, he addressed openness in a question/answer session after speaking as part of his WOZLive tour:

I like a lot of the openness in Facebook and Google, and Apple makes it difficult to get into (things like) calendars. I think Apple could be just as strong and good and be open. I’d like a programming language like Applescript on my iPad, but no, no no. There are a lot of things about the closed-ness of Apple I don’t like, and wouldn’t do myself. But obviously there’s a lot of quality to the products. If making it open wouldn’t make the quality the same we want to make it, I’d say keep it closed.

As Slashdot readers rightfully point out, Woz has not been a relevant player in Apple’s trajectory for a long time. (And he doesn’t shy from making radical statements: in another Sydney interview this week, he advocated for abolishing all country boundaries.) It’s unlikely that Tim Cook will change Apple policies based on Woz’s offhand comment.

But I think that comment is part of a bigger, worldwide call for openness among major technology companies. Even though iTunes censors the word “jailbreak,” an estimated ten percent of iPhones are jailbroken. The HackStore, an alternative Mac App store like Cydia for the Mac OS, launched late last month. And I hope the media attention Woz’s comment has drawn is the beginning of a sea-change.

In a Wired article last month, Thomas Goetz identifies patterns Wired writers have noticed in technological innovation. Two of the seven trends are related to transparency, freedom, and openness. “Favor the liberators,” he says, and “bank on openness”:

In the words of investor Fred Wilson, “scarcity is a shitty business model.” […] And for all the closed-world success of [Apple and Facebook], the world at large is moving the other way: toward transparency, collaboration, and bottom-up innovation. True openness requires trust, and that’s not available as a plug-in. When transparency is just a marketing slogan, people can see right through it.

Apple’s success has a lot to do with people’s goodwill toward the company. If they continue making less-openable, less-repairable hardware and block out good developers from making software for their machines, that goodwill won’t last forever. Yes, the public flocks to Apple in droves. But it can’t keep pissing off the gadget geeks who publish reviews of and develop software for its products.

Thus, I offer a slight correction to Woz’s comment: Apple can’t stay just as strong and good unless it becomes more open.