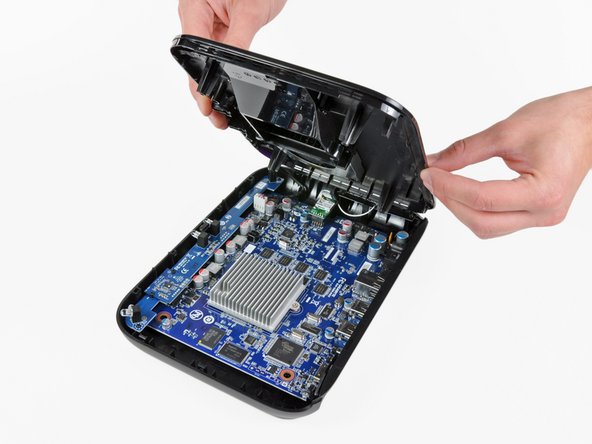 The Logitech Revue just came into our possession. It’s the first device on the market that uses the Google TV platform, and we were quite excited to take it apart to see what someone gets for a couple hundred dollars over the Apple TV.

In short, not much. The Revue is a plastic box with a motherboard inside. Its specifications are built up just enough to be slightly better than the Apple TV, but everything about it screams “netbook.” It has netbook processing power, netbook plasticky feel, and even a netbook-style keyboard.

We discovered the true specifications for the Revue, which also confirms our “netbook” impressions. Here’s how it stacks up when compared to the Apple TV:

Aside from the RAM, the Revue offers very little (if any) extra performance when compared to the Apple TV, and is on par with netbooks released back in September 2008 (Dell Mini 9, we’re looking at you).

The Revue did score high marks on repairability: 8 out 10, with 10 being easiest to repair. Opening the case is super-simple — only 4 screws and a bunch of clips stand in your way. All the screws are of the Phillips variety, but it would be good to have a plastic opening tool handy if you choose to peek inside your own unit. The fan’s easily accessible and the motherboard connectors are simple to to disconnect.

Out of the box we had high hopes for this little machine. But as we were carefully taking it apart, we started getting scratches (from a towel!) on the top surface. Post-teardown we reassembled it and spent ~20 minutes setting it up, only to find a just-OK user experience. Unfortunately, the Revue let us down.