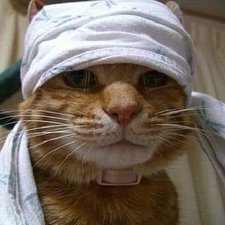 How to fix Broken watch band?

i need help please is it possible to repair this damage? any one can guide me for this ? 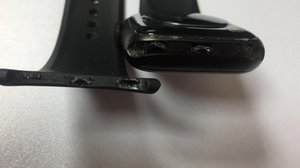 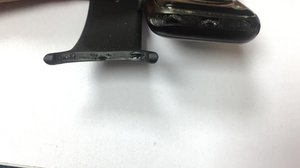 Sorry the band its self is not repairable only replaceable.

Thank you @danj but if u look closer you will see it is actually broken inside the watch. where the bend slides onto the watch body, i look every where but there but couldn't find a fix

You’ll need to replace the strap with a new one. Do you have one? If not you’ll need to get a replacement first.

As you’re missing the band from one side you’ll need to use the other sides band to push the piece which is still stuck inside the groove.

I fully understand what your problem is. I've even had the same issue with my watch too! The band snapped in the exact same place. I’ve also saved quite a few others besides.

Let’s look at this with a similar design Dovetail Joint used in woodworking. As we can see the top edge in narrower than the base so the joint is very strong you can only slide it out from side to side. To keep it from sliding glue or a pin can be used to lock it in place.

Apple used this basic design for their watch. Here we have a pin type of design which is controlled by a button on the back side of the watch, pressing the button applies a bit of pressure to unlatch the pin lock.

As you have nothing to grab you'll need to push something against the part that slides to push it out. The problem unless you have someone else to help you its almost impossible to do as you need a means to hold the watch and press the button while someone presses the good strap end into the watch.

I ended up using a couple of pieces of wood which I drilled out and carved as top and bottom plates of the diameter of the watch face so I could sandwich the watch in a small vise as my extra hands to hold the watch and a hole which I placed a small hardwood dowel aligned with the point I need to press to unlatch the pin. It took me a good day to make it! I’ve used it over a dozen times now saving others.

Sometimes skin and other junk jams up the release button so you may need to use a cleaner or solvent to flush out the button to get it to work. You may need to soak the edge with the jammed button I used a shallow petri dish a couple of pencils and rubber bands to fashion a clamp to hold the watch so only the edge was dipped into the dish with the cleaner or solvent just enough to get the button and not the sensor disk wet, I also placed electrical tape over the displays edge so it didn’t get wet either.