My screen shattered and my phone is now dead. Can it be salvaged?

Hello everyone. A few days ago, my iPhone had an accident that caused the screen and most of the upper portion of the phone (i.e. the front facing camera and earpiece) to shatter. To be more detailed, the cause of the cracking was a result of one of my headphones being wedged up against my phone and pushing against the it until the regions described above cracked. As a result of this, the screen was left mostly black (i.e. no light/color) in the bottom left, right, and upper right portions of the screen. The upper left portion, along with some of the bottom left of the screen had been left with the "rainbow lines," which I discovered through prior research to be a result of a broken digitizer or LCD (this is not the part I am concerned about; the “rainbow lines“ can also be seen through a former ifixit post such this My iPhone 6 has lines and black spots all over the screen). As of yesterday, my phone was fully able to be tracked via Find My iPhone, received notifications (as evident of the vibrating of my phone), and I could feel the haptic feedback as a result of the phone asking me for my password. This leads me to the current predicament I am in. To be brief, yesterday I was taking screenshots using the home + power buttons to see if the on-screen flash that normally appears would somehow show up in the damaged "rainbow line" portion of the screen (it did not). After doing this a few times, the phone suddenly shut off (in that the rainbow lines went away and the phone became untraceable, failed to receive notifications, etc). So my question is if my phone would be fixable? I have a lot of photos and contacts that I would like to back up (something that I have regrettably failed to do since this October past). I know I will need a screen repair and that that is not an issue, but I am more concerned on whether my phone can be fixed to turn back on and allow me to back up my data. I tried charging the phone earlier and felt the top portion of the phone grow warm (which is normal; it also was just faintly warm and not scalding hot), something that I hope is a good sign that it can be salvaged. My current hypothesis is that the phone somehow short circuited as a result of the screen crack but I am honestly not 100% certain. Thank you for any help you can provide! 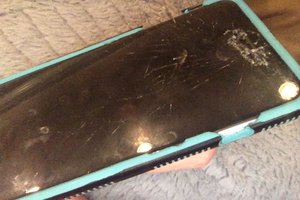 I would encourage you to try to narrow down the problem before assuming there is a short, since it could be a hundred different things. If the device charges that means it's at least partially functional. Just troubleshoot it the good ol' fashion way instead. You'll likely save yourself some money. Consider opening it up, if it is a short and it didn't destroy and components then it's possible it will work fine once the screen is removed.

Yes, I have tried connecting the phone to my computer. Unfortunately, the device is not recognized. I assumed it was charging due to the fact that the top of the device grew somewhat warm while in the assumed charging state and later cold as a result of reaching full capacity (although I may be wrong for assuming this). I'll definitely investigate it further. I just find it very odd how it worked for a few days after the incident to all of a sudden dying altogether. If you have any other suggestions please feel free to send them here. I'm always checking for updates to the post. Cheers!

Your broken screen likely caused a short. The most likely is a short on vcc_main. There are a lot of components that can short that receive power from vcc_main. You will likely need to find a repair shop that does micro-soldering to fix your phone. Given your description I would say its pretty unlikely you have done irreversible damage to your phone which is the good news. If you have a shorted component you will have to clear this short before your phone will power on. You also should not try to charge the phone until you resolve the issue so you do not cause any further damage to the phone.

Thank you for the reply. I assumed a short was the likely culprit simply due to the fact that the phone suddenly and unexpectedly shut off and will not turn back on. I will definitely be doing some more research on vcc_main shorts and will be searching for a repair shop that is reputable in micro-soldering. I appreciate your timely and knowledgeable response. Thank you very much!

No u most likely dont have a short or any other nonsense like that follow the guides and replace the screen and u should be fine… that would be the first thing for anyone to try as the first step. If that doesn't work then report back here be careful about not causing additional problems though like long screw damage etc…

I would agree with you typically but from the description the phone shut off while being used with the damaged screen and will no longer power on. Obviously the screen assembly needs to be replaced anyway since it was completely destroyed. My only suggestion was that they find a shop that can handle micro-soldering so they are not stuck paying multiple shops to repair the phone if a screen repair is not the only needed repair. I cannot diagnose a phone 100% that I cannot physically test and neither can you. For you to say my post is nonsense tells me you likely do not know as much as you think.

I've never seen a broken screen cause a vcc main short please do let me know how components get shorted??? Lol

The screen was broken then the battery either died or the screen just broke further where its unable to display anything, microsoldering is a last resort till parts are tested

May I just inquire as to why you don't believe that a short occurred in the phone? I don't mean to question your knowledge, but I just found it odd how the phone "worked" (in that all functionality except the screen stayed fine) until just all of a sudden dying seemingly out of nowhere, you know? As far as my memory goes, the phone was in the mid-seventies percentage wise when the screen cracked.

Also, the phone was in a somewhat hot (but not scorching and well circulated) attic for a few days as well after the incident if that helps. I don't see how the attic might affect the diagnosis of the phone, however, other than maybe causing the battery to die very quickly (but I'm not sure if that is an even feasible explanation). I also find it odd how it never turned back on after charging it even though it seemingly charged fine. Oh and also, I did try toggling the ringer, pressing the home button, and pressing the home + power button combo as well as trying to connect the phone to iTunes but the it has shown so signs of life... Thank you for your input thus far, it is duly appreciated!

Shorts occur through electrical damage or water damage, a short is a fault in electronics where something essentially becomes a wire... its very odd for the incident u described to cause a short, yes u could have dropped it with such force that u have caused an open line as in knocked off a component, broken a solder ball, even electrically damaged tristar by just one time plugging it into a plug that it didn't like all of that is possible... however much less likely is a short unless u did get water in there at the same time.