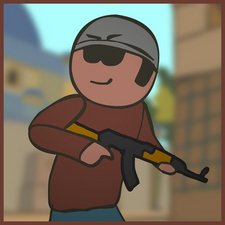 No display but fans are spinning

I bought this last month because the store is having a sale. Since I got it cheap, there are no warranties. It was working for a month then it died for no reason. I haven’t done anything abusive (like overclocking, etc). While the PC is on, I touched the part where the die is placed. It’s not heating up but the fans are spinning. I don’t get any display either. I tried the card with a different rig and it is still the same. I cleaned the contacts with 99% alcohol and tried it again. Still won’t display. I plugged the cord of my monitor to the integrated graphics display port and it did show something (the bios, windows boot manager). I tried using another video card to test my motherboard and it did work. What could be the cause of this sudden death? I also plugged in the 2nd 6 pin (there were 2 of them) but still wont function. Are there any fuse to check? I don’t find disposing as an option because it feels like it is still repairable. Do share what you have in mind. I do know how to solder (and similar). I need help in finding the fault.

Soldiering will not help a lot in cases of dead GPUs. Now, few things:

It is fair to assume your graphic card is dead. As a last light of hope, you could try updating your MBO BIOS to see if thats gonna change anything, but chances are slim.

@matt88 Here are my answers:

1.) I have tested this with several computers. It shows signs of life (like a bit of heat and fans are spinning).

2.) Oh, I think I made a confusion there. I tried other cards and it worked perfectly fine. I did change the settings from the BIOS. Instead of "Force" (which forces the bios to use only the IGD), I picked 2 of them. The first attempt is set it to "Auto". No result. Second is to set it as "Disabled". It gave me 4 beeps (2 slow and 2 fast, same tone). The BIOS is AMI Aptio. My PSU is Corsair VS550.

2.1) The country where I'm in doesn't have a ground pin (is it because the electric posts have already ground in them?)

I only have an HDMI plug atm. My monitor only has VGA and HDMI. The GPU has 2 DVI (looks identical), 1 "not-so-familiar" port, and an HDMI port.

The computers I used to test are completely different (aside from HDD, RAM, PSU)

The specs of the computer I used to test:

PCI: Linksys WMP54G (nothing else)