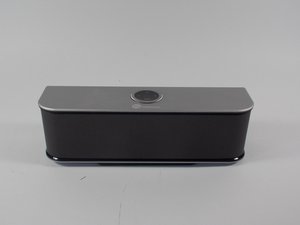 The TT-SK06 Wireless Speakers manufactured by TaoTronics are durable Bluetooth speakers made from an aluminum alloy in a metal casing comes with two 10W drivers.

It does not turn on

I leave it pressed 1 second and it does not turn on. When I start to charge a yellow light, only that does, nothing else

While the device was still charging, I pressed the Off-switch. The next morning it did not turn on anymore. Earlier I noticed that the keys do not react when charging. When I wanted to disassemble the device, it suddenly turned on. Loose contact or programming error?

I have another TaoTronics product (the TT-SK03) which is a smaller round bluetooth shower speaker that charges via micro USB. It stopped working; it would charge but wouldn't turn on. TaoTronics took responsability and sent me a new one. The old, broken one I tossed in a drawer instead of throwing it out.

Today I found it and decided to open it up to look inside (and maybe find out what went wrong with it). It has some rubber plugs to waterproof the screws which I carefully pulled out with the point of a corkscrew and then I opened it up.

There is a speaker, a battery, and a tiny tiny control circuit with something like 4 wires coming off of it. All the electronics are covered with a waterproofing coating (like glue from a hot glue gun) and I noticed that one of the wires seemed to be moved a hair out of place (I don't even know if it is soldered or just glued into place). I pushed on the wire with a screwdriver to move it a little and now it works!!!

You may have a similar problem as the light goes on when you're charging, but it doesn't start.

Good luck fixing it if you still have it!

Had same problem. Opened it up and pushed all contacts and working. Thank you