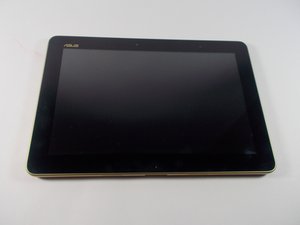 The Asus Transformer Pad TF103C is a 10.1 inch Android hybrid tablet released in June 2014. It is specifically for entertainment use with wifi ability.

I'm having issues with my Asus tablet running Android Lollipop. For the past few months, the touchscreen would stop working momentarily, then everything would come back to normal after a few restarts. It was more likely to happen when the tablet was charging though. At some point I found a weird hack that was plugging the tablet for a second every time it happened.

Now for the past few days, this would work and the tablet is now useless without its keyboard. I've read on some forums that the Battery Saver app could be the cause. Indeed I noticed a bug with it because every time the tablet was charging I would get a notification saying that an app was drawing too much power, but the Battery Saver app would crash every time I tried to open the notification.

Last night, I disabled the power saving mode and rebooted the tablet (as suggested in the forums) but it didn't do the trick.

This morning, I tried to reset the tablet both via the settings menu and recovery mode, but then touch screen is not working. I also tried to "swipe cache partition" but none of this would work.

Is there anything else I could try? I'm not sure if it's a hardware or a software issue, but as far as I remember the tablet has not received any impact in particular and there's no scratch at all on the screen.

I have exactly the same problem, did you find a solution? thanks in advance.

No, and this will make me think twice before buying other Asus products.

I used to have the same issue and the I used to dindn't mean that the issue was fixed what happen to me is the tablet is now completely dead, very disappointed about asus a brand that I used to love but the quality is so bad now, in other hand lenovo products are super cheap now and durable too, by the way I'm an IT guy and I handle this kind of products every day

Hello,I have same problen and I find the system repair program from Google Play(that brown logo).Then I was ran the program,I put the device to factory setting.Then it start the work.It works untill now I typing tekst.Good day.

Hello agen.Notice that programs that you installa on Asus transformer Pad,can make issues to it.My ATP:s screen touch stops working and I delete all new programs on it.Good luck.

Then I had a think about the connections to the screen: they come into the same small sub-board as the USB connection, and both the USB power/signals and the touch screen signals go through another pig tail connector to the main board.

I thought that it is possible that the movement of the plugging and unplugging of the USB (as per Andre's original post) might disturb the connectors.

So I reseated the pigtail connector going to the main board as well. That was over a month ago, and the problem has not come back.

I hope this works for you as well.

here is the video that helps: https://www.youtube.com/watch?v=nCGkshgs...

Thanks for the video, it seems to work now. I think you should create your own answer instead of a comment

It only worked for a few minutes for me.

See my message in one of the other threads about the same issue, same model

do you have a link to that?

Why won't my touch screen work

Sorry for late reply, Ifixit didn't inform me about your question. You can always click on a user's icon to see their contributions

No, it"s definitely a software issue. I'm able to use it after I play with the charger (plug/unplug/sleep/wake)

Only if you can replicate both the problem and the way to fix it, you can be sure that it's (in your case) either a hardware or a software problem. There are people who have a dead touchscreen each time after wake up from sleep and revive it using a cold reboot.

In my case such a solution or for example draining and recharging the battery sometimes seem to work... but more likely it's simply the mechanical handling (laying down, closing screen on keyboard, connecting, disconnecting that might or might not accidentally make or break the delicate loose connection . Because in my case it does work 100% of the time to open the back and press the flatcable firm into its slot. It keeps coming loose from time to time so perhaps I should fixate it , hot glue or so?

I've seen other people mentioning this issue on other forums. I'll try flashing the tablet again and see how it goes. Again, I'm 99.999% it's a software issue. Even the Windows version of the tablet has this, but it's easier to fix (with a few tweaks in the Windows settings that unfortunately Android doesn't have).

Is there a tutorial or something on how to open it? I'm not really comfortable with it, how hard is it for someone who has never opened a tablet or a phone?

Interesting​. Can you show the cable to play with? Is it easy to reach? Thanks

Are you think programs that you install it?My opinion is that if you download lot of programs that is not optimise your pad,then it can bad. 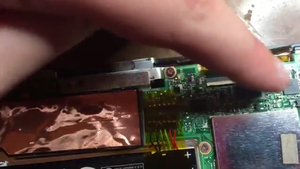 where the finger points

So should I just touch it?

Well, I swapped in a digitizer/screen (unplugged the old one and plugged in a new one that I left on the desk) and it made no difference on mine

I fixed this by:

b) Opening the back cover

c) Disconnecting the battery for about 10 secconds

Hi. I had this problem too. I bought this tablet 2days ago as used. And it started no responsing after first charge.

Also re-connect, just for sure, touch/screen double flex cable (on right side down under silver tape).

I am using it as a tablet without docking to keyboard. Therfore such solution. 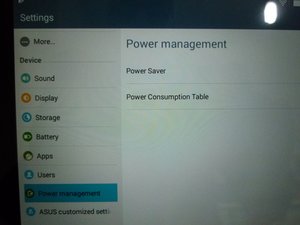