Unresponsive Keys, but only sometimes?

On my macbook laptop, the left cmd, x and z keys are unresponsive most of the times. This is where it gets weird, sometimes they work at random! How do I diagnosis this problem? I'm totally clueless.

Also, at first I thought there was something physically wrong with my keyboard, perhaps something is stuck that prevents the switch from being recognized but then randomly it starts working. sometimes it doesn't work for hours, other times it does. There isn't a scenario that I can reproduce making it work. I also opened up my macbook and looked at where the keyboard ribbon is connected to the logic board, I don't know what is up.

If you have another device... open the directions found here: https://support.apple.com/en-us/HT201295

If that does not work... It sounds weird but doing a PRAM reset to follow will kick out most cobwebs and get things running again. Do that by holding opt + command + P + R at the same time at start up (before chime)... Keep holding...the screen will blacken again... then release once you hear the chime for the second time.

If this fails, or the issue repeats... Follow the steps found here: https://support.apple.com/en-us/HT201257

Spoiler alert on the last one... it's boot up your computer holding the D key until you see the AHT icon pop up. You should be able to easily follow the steps in the prompts to walk you though testing your hardware. Make sure any peripherals are disconnected when running this test.

You may end up having to replace the keyboard at some point... but first start with a simple SMC reset... then PRAM... then the AHT.

Hi, I had an intermittent A key on my Macbook Pro Late 2011. Sometimes additional pressure made it work, sometimes simply nothing. I was already considering to replace the keyboard with a cheap one from eBay but before, I tried swapping the ribbon system taken from another standard key, doing deep cleaning with rubber alcohol and a lot of compressed air and hoover to be sure not even a residual debris was in there.

Nothing changed. At the end, after a very close inspection, I found out that the small silicone cup has a sort of liquid drop into it. I was able to see a little bubble while pressing. So, having the ribbon removed (again) and keeping the cap in place without removing it (i didn't want to risk to break it - there was a lot of stock superglue keeping it in place- I raised on side with a needle an I have dried it with hot hair from a small hair dryer, being careful to don't get it too close or too hot. I spilled no liquid into it, but a low amount of cleaning product could have leaked in there.

I have been using my MBA for 5 years for all my self business and at home. My left shift key was also not working randomly. And because I use my 10 fingers for writing (since the time of typewriters) the problem was annoying me for the last 2-3 months. Tonight, I used a knife and a packed milk pipe to blow some air under the key while lifting a bit with the knife. So I spotted the suspect a broken staple! After a careful operation, the problem is fixed now.

I understood that I would be a good surgeon :P 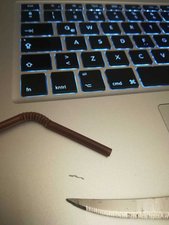 Some models only require the ipd ribbon to be replaced. Not the 15’ models :(

doubt its any cheaper to try first though. Nothing else thats a top case replacement/ that you should take in to a genius bar/ and say you have some keys not functioning at random. Heads up Apple may charge at least 400.

I just fixed my 2012 model... not for the faint of heart as it requires to remove the entire logic board and then continue to carefully proceed forward by removing a plastic sheet covering the bottom of the keyboard and patiently remove 72 extremely small screws that will then have to be screwed in one by one onto the replacement part. But at least now I have a keyboard that works well once again.

Just going through this with my 15” MacBookPro9,1. D key has been very intermittently flaky for awhile. Hold it and sometimes it will start working with no change of pressure and no even slight movement whatsoever. Sometimes nearby letters would do the same thing. Really seemed like a software issue. Would come and go, and be perfect for weeks.

Today it was bad. Did the following:

Did not do a PRAM zap today, but did one several weeks ago to cure this issue, with no improvement. There may be thermal effects involved, and i do eat at this machine so even though i don’t recall any spills, there may be chemical contamination/degradation from a past event.

It’s become so bad that during the course of typing this message, i’ve had to attach an external keyboard. What is really weird is that sometimes mashing down (multiple simultaneous presses, not high force) other nearby keys (the others which intermittently fail) along with the D key will reactivate them both—interesting key matrix stuff going on there, i’m guessing. For me, it’s a hardware issue: keyboard problem. Sad that there seems to be one factory in China making all the replacement keyboards that everyone sells, and that this replacement allegedly does not have the Apple original build quality and feel (and one report of a dimmer Caps Lock LED).

This is my primary Mac and i’m an author, so i need to go with a fully functional keyboard. I’ll nevertheless attempt to fix the current one for use as a spare once the replacement is in. The point of this answer is the sequence of troubleshooting steps and the eventual conclusion that it’s a keyboard hardware failure.

Best thing you can do is to use a stand for your laptop so that the display is in the correct ergonomic position :

and use a wireless keyboard and mouse for typing !

As a writer you are propably not using a keyboard as HEAVY as a gamer ... but chances are high that your keyboard will wear out again as fast as before, and a wireless external keyboard is not only cheaper to replace ... it also is more HEALTHY for you because of the more ergonomic use of your laptop.

Avoiding to use something is not a solution to the problem.

Appreciate the time you took to type your response, MEX, but it’s utterly irrelevant to me: i write novels with my Laptop on my Lap. My mental writing flow is far better this way. I have worked at a desk, less effectively. Doing so, i’d use an iMac or Mini or somesuch with a wired keyboard—far easier to replace.

My issue was mostly a very, very minor water spill (turned over and drained the MBP immediately, but apparently not good enough), rather than outright mechanical wear. I’m looking into keyboard covers (“condoms”) to minimize liquid ingress.