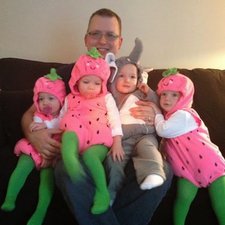 Is it possible to replace the DVD with a blu-ray drive?

My mid-2011 iMac came with a DVD drive. Is it possible to swap this for a Blu-Ray drive?

Yes you can, but there's a limited range of Blu-Ray drives that fit the bay correctly. You'll need a 9.5mm slot-load SATA drive, such as the Panasonic/Matsushita UJ-267 CD/DVD/BR burner. Most of the laptop-style bare drives available are both 12.7mm and tray-load, and won't fit the iMac at all.

Assuming that your internal SuperDrive still works acceptably, it might make more sense to buy (or assemble) an external Blu-Ray player, and connect to your iMac through USB. OWC carries several Blu-Ray players/burners, in both laptop and desktop sizes. This helps you avoid the risk of pulling the display out of the iMac case.

EDIT: I failed to note in the original answer that you can also use a 'combo' drive: CD, DVD recorder/Blu-Ray player. There are a wider variety of Blu-Ray combo drives available that will fit the iMac optical bay; apparently those drives are now a common option in Windows laptops. The same physical limitations still apply: 9.5mm thick, SATA, slot-load. The iMac case won't accommodate the far more common tray-load drives or 12.7mm drives.

ANOTHER EDIT, FIVE YEARS ON: On BR player software, I failed to mention in the original answer that all BR player software on Mac is just terrible. The commercial players don’t generate the clickable graphical interface you get with a standalone player, or with DVD player software. They don’t even list tracks by name; all you get is a list of numbered tracks with playing duration, and you have to guess what you want to see. On a disk with a lot of extras, you may see 100 tracks or more, without many obvious clues about what to choose.

However, Macgo has released an upgraded version of their player: Macgo Blu-Ray Player Pro. This application does use a GUI, so you can choose tracks as you would expect. One quirk is that mouse/trackpad movement/clicks do not work; apparently, standalone BR players use a Java applet for navigation between UI elements, and Java is no longer supported by macOS. You can navigate through the interface using the arrow and return keys.

VLC also uses a GUI, but its drawback is that it will only play BR disks that are *not* copy-protected.

I should also amend my software point: Mac Blu-Ray playback software is universally terrible. VLC will display the full user interface that you'd get on a standalone player, but only for unencrypted disks; with commercial encrypted BRs, VLC will only play if the proper decryption libraries are installed in the proper places. VLC has an Open Source download for those libraries, but with no installer; they refuse to provide installation instructions, in order to dodge licensing restrictions. The various commercial applications (I've added Aiseesoft, AnyMP4 and iDeer since my original post) all have the same crummy interface: A text-based splashscreen, with no description of menu items. Each file is described exclusively by its time duration. Since a Blu-Ray may have lots of extras and subfiles, you can easily have 100 files listed, with no idea of which is which.

A second amendment on playback software, this time on DVDs: If your Mac had an internal optical drive originally, Apple's DVD Player will only work with an external drive if the internal drive is still attached to the internal SATA bus. This works even if the internal drive is dead; the system detects the devices, launches DVD Player, and offers the opportunity to play disks in either drive. If you remove the internal optical drive to do a two-HD/HD+SSD installation, DVD Player won't launch. In that case, VLC will play external DVDs. If your system never had an optical drive (MBA, MB Retina, MBPro Retina, 2013 and later iMacs, 2011 and later minis, coffee-can Mac Pro), any external DVD/BR drive will play DVDs with DVD Player; Blu-Ray playback will rely on one of the underwhelming third party options I've already described. I think Mac users are entitled to be ticked off about this; maybe Windows users consider the terrible text-based UIs to be acceptable, but we should demand something better. I'm in the middle of drafting nasty emails to send out to all the third party developers I've paid for their crummy UIs; I suggest that other interested users do the same.

Thanks for all the input. I run Windows 10 via boot camp and I'm primarily looking just to rip the discs to put in my Plex media library. Hopefully it should work fine for that.

Oh yeah, if you're approaching Blu-Ray playback from the Windows side, I assume the playback applications are less ugly. Frankly, I suspect the Windows versions of the apps I've listed provide normal movie UIs (I've never tried them), because I can't see why users would tolerate the terrible UIs in the Mac versions. There are Blu-Ray ripper apps on the OSX side; Aurora has a free BR ripper for both Mac and Windows. MakeMKV is a transcoder that can convert BR and DVD into MKV format for playback with many applications.

I believe the answer above is wrong. I am adding this in case someone else wonders.

My 2010 iMac certainly required a 12.7mm drive which I have fitted. It's the Macbook Pro that requires a 9.5mm drive.

There are many more options for slot-ins here, both Blu Ray burners and players, UJ265 from Panasonic is what I went for.