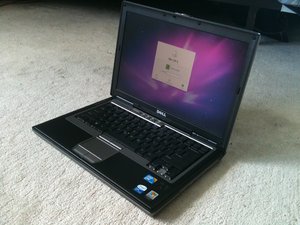 Released March 2006, identified by model D620 on the keyboard bezel.

If the second charger failed immediately the first time you used it, then there is most likely a short inside the computer, you will have to get the computer checked out or fixed first, then buy a new charger. If you want to know how to do this yourself, ask here or post another question. I can tell you how to test it, but it is a bit technical, and you will need a DVM, which start at about $20, unless you can borrow one from a friend. You will also have to buy a power connector at Radio Shack, which runs about $5 to $10.

If that is not the case, read on. I have only heard about this second type of charger failure one time, on another fix-it site which charges $$$ for answers. The problem was actually in the socket of the house's electrical system!

A single occurrence of this can blow out the transformer, but there is a big randomness factor due to the nature of AC power - switching (or plugging and unplugging) at zero-crossover time can not cause damage. Damage is almost always done near the peaks of the sine wave of the alternating current.

If you used the same socket for the 2 failures, and you were able to recharge the laptop several times in between, then this is likely the problem.

If you have been using a loose wall socket, then this is much more likely to be the problem than if you were using a tight wall socket.

Try using another socket with your next charger, and use one which firmly grabs the charger.

And tape off or better yet have an electrician REMOVE/REPLACE the bad socket!

The D620 does not have a separate charging / inverter board on the main motherboard. So the entire motherboard usually needs replaced. A lot of work for someone not trained in laptop repair. I usually replace about 3 or 4 of these motherboards per week, and it takes me about 1.5 hours per board - just to give you an idea. BUT, several places on EBAY say they can repair the board so you won't need to purchase a new motherboard. It usually costs about $150 - about $75 less than a motherboard without the labor of a technician. Check EBAY and look for one of these auctions where you can send in your laptop and they can fix it and send it back for less than the cost of a new board. If not they usually buy your laptop from you to use for parts - like the LCD, hard drive, keyvoards, etc. Good luck