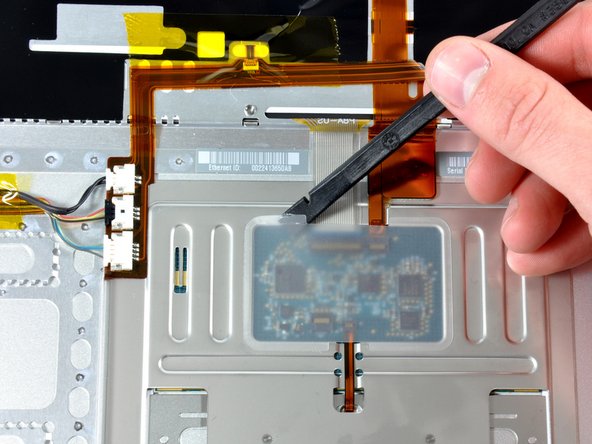 Upon waking up my MacBook Pro one morning, I found the computer nonresponsive to the keyboard and trackpad. After some web research, I found a tweak (taping down a portion of the upper case cable) that restored normal function. The tweak worked for a while, but after a couple months, the problem came back and could not be solved in the same way. So, I took a 30-dollar gamble that replacing the upper case cable would resolve the issue... so far everything's working without any problems.

I followed the replacement guide to the letter; the whole process went smoothly with only a couple issues:

First, the cable was stuck to the case with more than an anticipated amount of adhesive. Any plans for a gentle removal of the cable were abandoned after an attempt to peel the cable away from the case ended with multiple kinks in the old cable. In retrospect, I wish I had used a credit card-type tool to separate the cable from the case.

Second, the two parts of the cable that connect the keyboard and backlight to the laptop each employ 'locking flaps', both located on the computer side of the connection, to achieve a secure connection. This means the cable itself does not use any plastic connectors to "plug in" those to parts of the cable. Instead, in both cases, what appears to be an abrupt end to the cable is inserted into the unlocked flap which is then locked down to secure the cables placement.

I'm detailing this only because I had not expected anything but the traditional male-to-female plug connection. When I saw the bare end of the cable (during removal of the old cable), I was pretty sure I had broken the cable and left its' plastic plug still connected to the computer. It took me a minute to figure out that nothing had broken and the cable itself did not have a plastic plug built into it.

Use a credit card to help separate the adhesive-laden cable from the case rather than attempting to peel it away... peeling only seems to damage the old cable further.