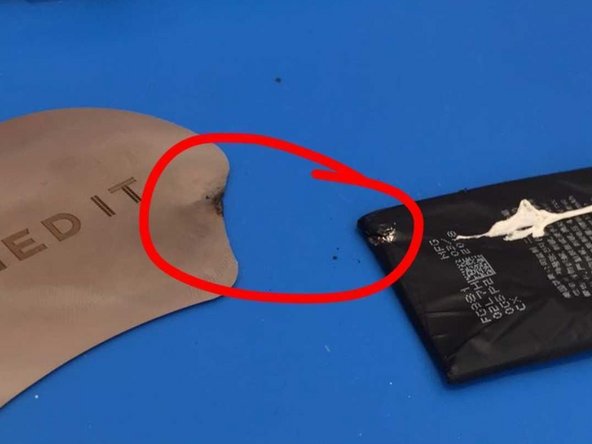 Customer brought an iPhone 6 into the store with a massive bulging battery that was pushing the screen out of the frame... not good.

As it was my first time removing a battery from a device unsupervised, I thought I would use a metal pry tool to get under that bulging battery and pry it the hell outta there. Little did i know that metal and batteries absolutely do not mix.

Got the little piece of sheet metal under the battery for all about 2 minutes before I heard a small popping sound. Only a little worried, but seeing no reason to stop as the battery appeared fine, I continued... to use the metal pry tool. Another quick slice with that tiny piece of metal and I could smell it before I could see it.

I didn't have to wonder long what the smell was as moments later plumes of smoke started coming out of the device in my hand. If you've never held an exploding battery before, it is terrifying. I discard the device onto my desk and stepped back as it kept blowing smoke for the next minute.

After the smoke started to subside, I investigated the slightly charred piece of metal that had made contact with the innards of the battery, and realised just what I had done.

The battery was still only partially adhered to the device, so I was able to pull the rest out by hand without using a METAL pry tool. Luckily for me none of the rest of the phone had any damage and it even still worked after I got the replacement battery in there. Customer was informed of a slight mishap but the device was functioning fine so I didn't feel the need to tell her I had blown it up an hour earlier.

Never, ever, never, EVER, use a metal tool when trying to remove a battery. Don't use anything metal at all near the battery if the tool is sharp or the battery is compromised. Just take things slow and steady and use alcohol or heat to remove adhesive with plastic tools, never metal.

When it comes to iPhone batteries, the only thing you really need to do to remove the battery is pull the adhesive sticky tabs off. Battery will safely pop right out with the adhesive gone. If you can’t find the tabs or they were installed incorrectly, then remove the taptic engine directly below the battery and use a plastic spudger or any flexible plastic tool to gently move it as far under the battery as possible, keeping the tool as parallel to the device as possible. I’ve seen that iPhone batteries can actually bend pretty far without exploding(which you should never consciously do unless you really really HAVE to), it’s really only super dangerous if you puncture it.