Cracking open was difficult and the battery connector is scary but I FIXED it! 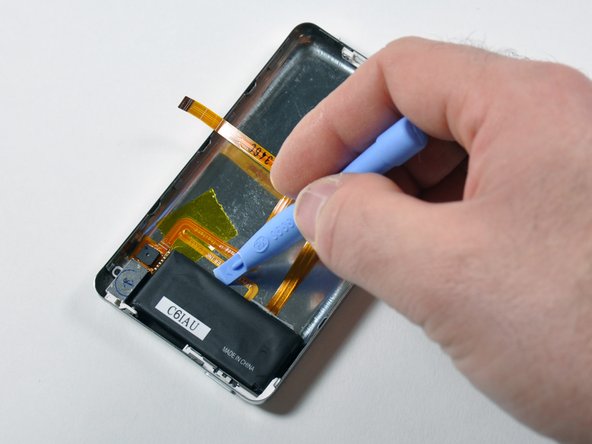 The battery was dead. The iPod didn't play reliably even when connected. I wanted to give my three year old son a possibility to listen to music for himself, because we parents are Deaf and don't need music, but was disappointed that the iPod didn't work quite right. Now I carpentered a stand and additionally bought a female-female connector for the PC speakers, and presto! my son has an audio equipment for himself.

I needed 40 minutes to crack open the iPod. I knew that. It's not easy to open the iPod. It needs very carefully applied force to open a tiny gap, then I additionally used two knifes so that the gap stays open while working around the edge. It was a fumble. It's a pity that we humans don't have four arms. Take it easy. Really eeeaaaassssyyyy......!! Slow and patiently makes the master. Don't despair. Don't force too much with leverage. When you have the gap on three sides of the iPod, it's almost done. Some plastic pins will break slightly but this is not a problem.

The battery connector gave me a scare. I pried it open upwards (never pry sideways), then the cable fell out. It looked like the connector broke, but it's meant this way. The cable just ends flatly with four contacts. When plugging in the replacement cable just slide it in then very carefully push down the connector. You should feel a tiny weeny click.

1. Take a short rest when you didn't manage to open the case the first time.

2. Be careful with the battery connector. Don't pry sideways!

3. IMPORTANT: The battery cable is very primitive. It just ends flat without any plug. The contacts on the end of the cable must line up exactly, however the battery connector seems to handle this for you. Just insert carefully and gently press down the connector till you feel the tiny click.

4. Don't close the iPod immediately. First charge for about one hour to be sure that the connector works.