Turns out, a phone wrapped in glass with curved edges and a small supporting frame might not be the best move for durability. According to emerging reports, the Galaxy S8 is surprisingly easy to break.

A month before the S8 made its global debut, The Verge’s Vjeran Pavic expressed skepticism that a phone with so much glass and so little structural support might not stand up to the rigors of everyday use. “In 2017, as smartphone makers keep putting glass on both the front and back of their devices, and as screen bezels shrink dramatically smaller, I think we’ll see the preeminence (and fragility) of glass in smartphones take on a new importance,” he wrote. After we tore down the Samsung Galaxy S8 and S8+ in April, our teardown engineers also noted that glass on the back and front meant double the opportunity for shattering. 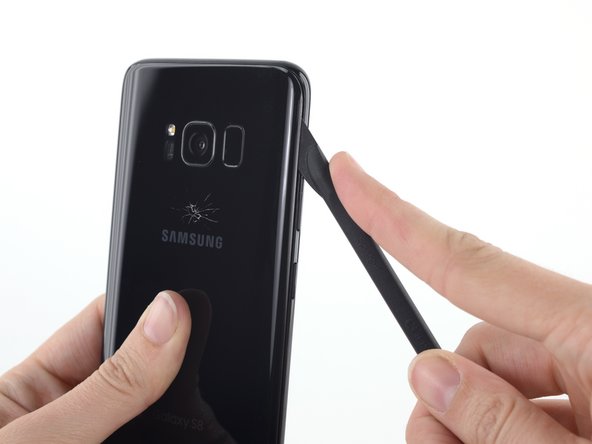 Those early assessments appear to be borne out in recent drop tests. In fact, Jason Koebler of Vice’s Motherboard called the Galaxy S8 “the most fragile phone ever made”—even with its updated Gorilla Glass. He cites the results of SquareTrade’s breakability tests, where the S8 emerged from every drop and tumble sorting a constellation of cracks on both the back and front glass. It’s the only phone to have suffered cracks on both the front and back after a 6-foot drop test, the company reports.

“A screen without limits,” SquareTrade quips, “except one: sidewalks.”

Of course, drop tests aren’t a perfect assessment of durability. And it’s worth noting that the S8 performed better in other durability tests. In CNET‘s and Everything Apple Pro’s drop tests, the back glass cracked from a hip-height drop onto concrete—but the screen held up. The S8 also emerged from Jerry Rig Everything’s scratch tests, burn tests, and bend test without much damage. Nevertheless, we’ve also seen a handful reports of Galaxy S8 and S8+ breakages on iFixit’s repair forums (though it’s difficult to gauge whether there are higher instances than normal).

A few commenters claim they had the Galaxy S8 in a case when it broke. Others just hadn’t gotten around to buying a case for their new phone yet, and they paid the price:

“So [I] broke my rear glass panel on my 4 day old s8+. Turns out these phones are so slick that they slip right out of your pocket. Mine hit a tiled floor on the edge, and the lower right corner of my screen cracked. [A]ll this while my case is coming in the mail…” writes iFixit member Na Jo.

Another iFixit-er, flibbertig155, left a comment on our S8 teardown: “Had phone for a couple weeks. Never dropped and take great care of it. Already has a crack on the back around the center of the screen. Maybe from bumping into my keys that might have been in my pocket. How did Samsung think this would fly? Leaving on my desk untouched till I get a super case for this thing. Very frustrating.”

And another community member writes, “My S8+ broken just falling from bed to floor. Now Samsung technician said $350 to fix it. Or [the] warranty will be void if repaired from outside market.”

A quick digression about warranty voiding: Unless you’ve opted for insurance that covers accidental damage, a broken screen usually isn’t covered under a warranty. Secondly, in the US, under the Magnuson-Moss Warranty Act, third-party repairs can’t void your warranty unless the repair or replacement part causes damage to the device. The same federal law stops a car manufacturer from voiding your warranty because you had your brakes replaced by an independent mechanic. On a more hopeful note, Apple recently told its Geniuses that replacing a broken screen with a third-party screen no longer voids a phone’s warranty—a major policy shift from how the company previously treated phones they suspected of having third-party or DIY repairs.

Of course, Apple’s updated repair policy is little help to Samsung S8 and S8+ owners who find themselves with a broken screen or shattered back panel. So what’s an unlucky owner to do? Well, on the whole, we scored the S8 and S8+ at a mediocre 4/10 for repair. The liberal use of adhesive and glass makes it difficult for a DIYer to undertake most of the repairs a phone might need in its lifetime. But that back glass (which seems particularly susceptible to cracking) while tedious to remove, is not overly difficult for a non-pro to replace. (Here’s a look at the S8 back panel repair guide.) If you don’t think you have the chops to undertake a Galaxy S8 repair, independent repair pros do have the expertise and the right tools to navigate past the nasty adhesive—especially on that screen.

And, more good news: Galaxy S8 and S8+ parts are already available for purchase to repair shops and for consumers. (We’re currently out of stock on our units, but they should be back soon.) Wholesale prices for screens sourced from China also appear to be more reasonable than they have been for models past, reports Motherboard’s Koebler.

So, to recap: (1) The Galaxy S8 appears to be fragile, so don’t drop it. (2) If you do break your S8, repairing it solo will be tricky. But if you don’t want to go to the manufacturer for a repair—don’t lose hope, because (3) many independent repair pros will be able to replace a broken screen with a new part that’s relatively affordable. Oh, and (4) put a case on your S8 ASAP. Better safe than broken.