After last week’s roundup of the Error 53 imbroglio, we decided to do some additional testing. Specifically, we wanted to see if the issue plaguing certain iPhone 6 and 6 Plus users could also afflict owners of the newer iPhone 6s and 6s Plus.

Our cursory investigation points to yes—the latest generation of iPhones are likely vulnerable. And while there’s a potential fix (detailed later in the post), it’s unlikely to help with the situations in which you’d need it most.

But first, a quick recap: Error 53 comes about when an iPhone with damaged or non-original Touch ID hardware gets an iOS update. Your home button—with its embedded fingerprint sensor—gets paired to your iPhone at the factory, and if iOS detects any change in that hardware, it shuts down Touch ID completely. Which seems sensible—this is a security feature, after all. Except, your iPhone continues to work just fine—minus Touch ID functionality, but with a passcode—until you update iOS. When you combine rejiggered home button hardware with a software update, you get an iPhone that displays Error 53—and not much else. In short, you are now the proud owner of an iBrick.

We know this issue affects both the iPhone 6 and 6 Plus models, first released in 2014. But the revised ‘S’ versions (released this past September) come with updated Touch ID hardware. So, maybe they are somehow immune to the error?

Time to see if we can intentionally brick our phone.

We took a fully functional, space gray iPhone 6s and removed its original home button. In its place, we dropped in the stock home button from a different, rose gold iPhone 6s. (For those keeping score, we’ve gone with 100% genuine Apple parts here—none of the “faulty” components that Apple has implied might provoke Error 53.) As expected, the resulting Frankenphone booted and worked just fine. Of course, the Touch ID was no longer functional, but that’s supposed to happen. So far, so good.

Next we needed to update to the latest build of iOS, which can be done in one of two ways. The simplest is by way of an OTA, or Over The Air, update—that is, downloading and installing the update directly on the iPhone, without connecting to iTunes. Normally a painless process, it failed us almost immediately. Unable to Install Update, it told us. An error occurred installing iOS 9.2.1.

But no Error 53. Although iOS failed to update, the iPhone kept working just as it had before—no Touch ID (as expected), but in all other ways a perfectly well-behaved iPhone.

Things changed after we tried the second update method. We downloaded and installed the latest iOS through iTunes by connecting to a computer (in this case, a MacBook Pro). Halfway through the process, iTunes gave us the bad news: The iPhone could not be updated. An unknown error occurred (53). 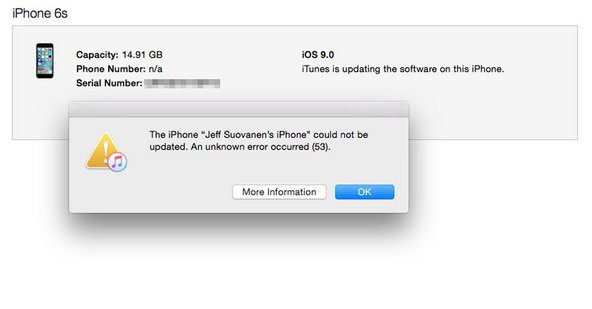 From there our iPhone went into recovery mode, ne’er to boot up again. Just like the older iPhone 6 and 6 Plus, tinkering with the home button and then updating through iTunes was the silicon kiss of death.

Of course, what bricked for us might not brick for you. Errors sometimes work in mysterious ways. We still haven’t experimented with the 6s Plus, but we expect you’d get the same result.

The good news—if you could call it that—is that we were able to back out of this mess the same way we drove in. After reinstalling the original home button and updating through iTunes, the phone was back to its old self—Touch ID and all. Unfortunately, if you replaced your home button hardware because it was damaged, you probably don’t have that option. As before, your only option then is to take your phone back to Apple or an Apple Authorized Service Provider—where, according to various reports, you may get a new phone for free, or you may have to pay for a new one. Either way, it’s the end of the road for your existing iPhone 6s or 6s Plus.