I love toys. From little red fire trucks to Nerf guns and everything in between, I’ve played with (and broken) a diverse mix of stuff in my life. So naturally, when unmanned aerial systems exploded in popularity last Christmas, my inner child badly wanted to race a fist-sized aircraft around my head.

After scouring Reddit and Amazon for reviews, I finally settled on the Hubsan X4 107L—a 30-gram micro-quadcopter, supposedly built to take all the abuse a noob like me could throw at it. After a few weeks of casual stress-testing, I got a bit more confident. I threw any regard for my quadcopter’s well-being out the window and tried out complex maneuvers like banked turns, slaloms, and flips.

Soon after, my quadcopter began showing signs of abuse—the Hubsan was built to take a beating, but my flying style gave it that and more. Within a few weeks the shell was cracking, and I was going through propellers faster than I could replace them.

Finally, my toy reached its limit—and after one (high speed, inverted) landing, one of the motors refused to spin up. I twiddled the sticks. I spun the quad all around. I even gave the motor a few solid thwacks to restore the loose connection—all to no avail. Although I had read up on the X4’s construction, I hadn’t yet opened up the shell to peek inside—mainly because I was afraid of upsetting some careful balance that kept the quadcopter in flight. Realizing my toy would need more than a little percussive maintenance, I decided to get my hands dirty.

With a replacement motor in one hand and a soldering iron in the other, I got to work resuscitating my quad. I removed the three screws underneath the body and snapped the underframe out of position to expose the motherboard. Then I desoldered the old motor from the flight controller and slid it out to make room for the new one. I put in the new motor, threaded the wires through the arm, and delicately soldered them to the world’s smallest solder pads on the motherboard. 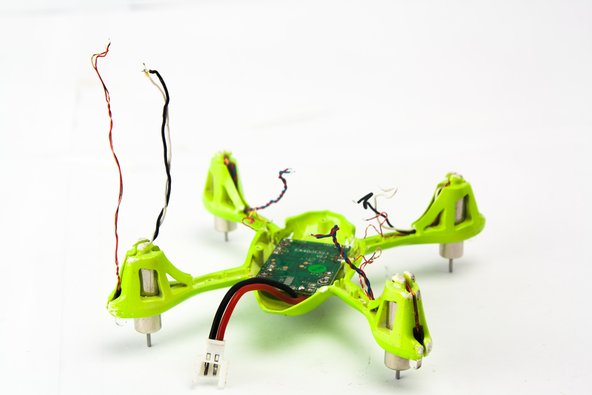 After sweating bullets for ten minutes, I managed to secure the wires to the board. I plugged the quad in to my bench power supply and flipped the switch.

Turns out, I didn’t set the output voltage on my DC power supply. When I flipped the switch, I sent 12V coursing through a device rated for only 3.7V. Turns out, I had developed the most efficient way to burn out a complete set of motors and LEDs in fractions of a second. And set myself up for a long day of painstaking soldering. Lacking parts for the repair, I wicked away all the solder from the broken components and let the X4 sit in a sad pile while I ordered replacements.

After the agonizing two-week wait for the motors and LEDs to arrive from China, I sat down and took stock of my quad. My poor, cracked, hot-glued, zip-tied quad. The frame was cracked, motors ruined, and the only part that still seemed to work was the flight control board (verified with a trusty continuity tester). Time for a fresh start: I clipped the zip tie off my frame and unscrewed the flight controller—at that point any further disassembly would have required a hammer.

I transferred the board to my shiny new plastic frame, placed all the motors and LEDs, and spent the next hour carefully connecting all 16 wires to their new homes. After triple checking my polarities, I plugged in a battery. The LEDs shone; the motors spun. My quadcopter looked good as new, and (needless to say) I was pumped to get back to crashing the X4 all over my house.

Sure, it included some precision soldering—but when you boil it down, this repair only involved a total of five screws and three unique components. Nothing too difficult. Still, fixing my nano-quad sticks in my mind as one of my favorite repairs. With some confidence, persistence, and $10 worth of parts, I was able to breathe new life into a completely inert plastic shell and circuit board.

The poor quad was broken, repaired, fried, and repaired again. Now its flights are that much sweeter—because I know that with the correct tools, you can restore balance to even the most delicate devices. And with the right amount of patience, there is no such thing as “too broken” to be fixed.

Need to fix your drone/UAV/whatever you want to call it? iFixit is building a drone repair resource. Check it out. 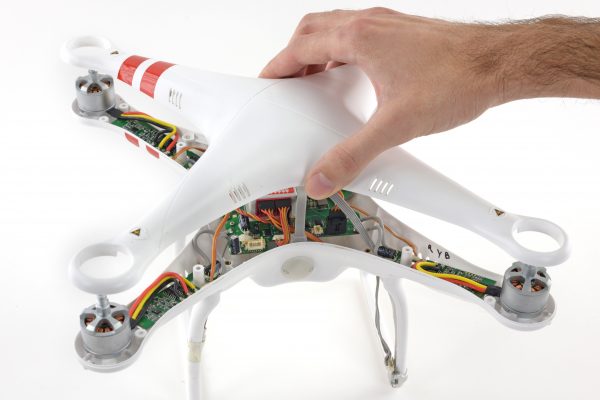 How Do I Fix My Drone? 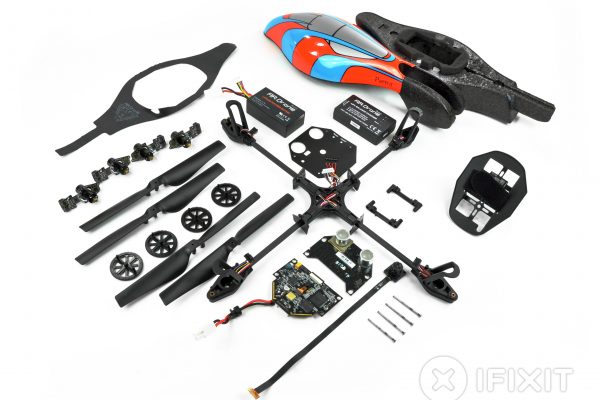