If you think about it, the newest of the new Nintendo 3DS XL is basically a small laptop — one outfitted with a 3D screen, a touch screen, three cameras, a “floppy drive,” and the trifecta of CPU/RAM/Flash that seemingly makes up every electronic gadget nowadays. Well, we wanted to see exactly what makes this little laptop-ito tick. And the innards did not disappoint. 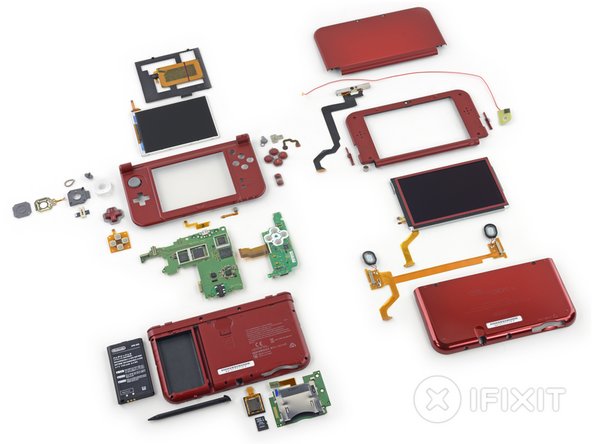 Having taken apart several 3DS / DSi models in the past, we knew ahead of time that this fella wouldn’t be super-easy to disassemble, provided that Nintendo kept to the same kind of internal design philosophy as before. And we were correct: the new 3DS XL scored a midpack 5 out of 10, having the same sort of convoluted layout as its predecessors. Yes, it’s completely fixable, but it’ll take you a couple of hours depending on what issue you need to resolve.

• You’ll have to remove the stylus before disassembling your New 3DS. After pulling it out, we noticed it to be a bit different than the old one. It’s the same weight as the old one—1.8 grams, according to our precision scale. Yet, it’s a bit stubbier, and feels a little cheaper.

• It seems Nintendo didn’t bother upgrading the battery in the New 3DS XL. Both models feature a 3.7 V, 1350 mAh battery rated at 6.5 Wh. Here’s a point where the New 3DS XL isn’t quite as new as we thought! We tested, and the batteries are interchangeable between both 3DS XL models.

• Once we got inside, our trusty Phillips drivers started to mysteriously let us down—these interior screws seemed to be in between two sizes. Surprise, they’re JIS! Now, where do we get ahold of a JIS bit…

• The circle pad cable is weirdly wrapped over its own ZIF connector, hindering access to…itself.

• Have you ever wondered how a gaming controller circle pad works? We were curious as well, so we delved deep into the 3DS XL’s circle pad.

• Do parallax barriers keep you up at night? Don’t fear, we explain them in detail in the teardown.

• After all of our success with explaining the workings of a circle pad, we were mystified by the C stick. Said C stick doesn’t actually move or push anything, and therefore seems to be powered by magic. You nudge it with your finger, and the 3DS just knows. There’s probably some science involved, and possibly a pressure sensing cable.

• The lower screen has a large black frame, perhaps as a defense against over-eager tapping. This frame also houses what appears to be the NFC antenna for Amiibo figurines. Always one to stay hip with the kids, Nintendo has expanded beyond AR cards to the collect-to-game cash cow.

• The upper display’s ribbon cable, and two others, are routed through the hinge, and need to be rolled up and pulled through in a horrible, painstaking, risky maneuver.