At Pacific Lutheran University, last week was finals week—that anxious seven-day stretch of too much caffeine, not enough sleep, and (all too often) not enough showering. So when a student walked into the campus library and sheepishly laid a coffee-drenched laptop on the help desk counter, repair guru David Domask and his student staff weren’t surprised. But they knew they needed to work fast. The laptop had papers to write.

The PLU help desk is a free technology troubleshooting and repair service, available to students, professors, staff, and members of the Tacoma community. David and his band of 17 motley student technicians do their best to diagnose whatever problem is thrown at them, with a Pro Tech Toolkit and parts organized on legal paper. They help their clients select and purchase repair parts, and then install those parts for free. 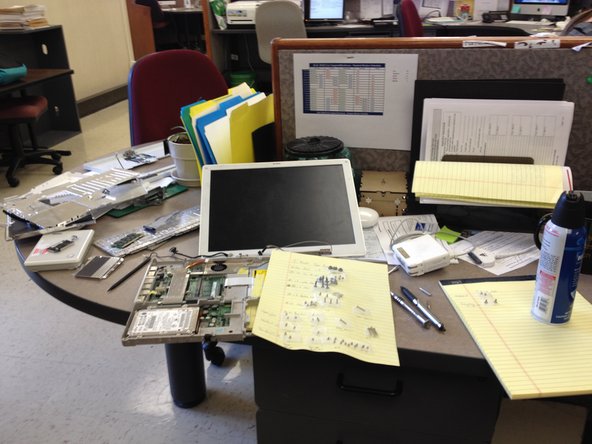 David took over as the help desk specialist four years ago, after working his own way through college as a technician. He’d never had any formal computer repair training before he started working at the desk—he learned on the job.

Quickly, though, he realized that the job was as much about people skills as it was about technical know-how: people whose life and work depend on their electronics functioning properly (like the “coffee bath” laptop student) are often distressed when those things break. “The job requires that techs are able to explain to our community what the problems are,” David says, “or how to do things on the computer in non-technical terms.” And it’s a lot easier to teach people how to deal with computer problems than it is to teach them how to deal with people problems.

That’s why, when he took over the desk, he started hiring more “people people.” He’s had to develop a training regimen that can turn repair neophytes into real fixers. David has their techs “start with the basics: open up a MacBook Pro and replace the hard drive.” As they get better, “They move on to stuff like replacing the HDD cable, replacing the WiFi cable, up to replacing the LCD screens on all sorts of machines.”

They really do get all sorts of machines—their official policy is that they’ll take a look at “anything with a current.” Most of the time, they get failing laptop hard drives. But they often also see ailing tablets, game consoles, e-readers, and printers. Always, their number one priority is to “get the diagnosis right the first time,” so students don’t have to “keep dumping money into repairs.”

To fix the coffee-soaked laptop as fast as they could, the help desk techs went straight to work.

“We first stripped down the machine part by part,” David explains, “one tech disassembling the machine and handing off the pieces to another tech who mopped up the lingering coffee and cleaned up the rest with alcohol swabs and canned air. We pulled the HDD from the device and surprisingly it was perfectly readable—we recovered the user data, and continued to clean the machine piece by piece, then set all the parts out to dry overnight. The next morning, we reassembled it, replaced a few components with ones from scrap machines (the exhaust fan/vent and the speakers), and to our surprise, it booted just fine.”

In less than 24 hours, the laptop was back in action, ready to write papers and take finals for its butterfingered owner. Another score for repair. PLU help desk: 1; Cruel fate: 0.

You are doing a very good job: repairing equipment and teaching students useful skills. Have you been recovering data from HDD? Tell me, can I recover data on my PC using Partition Recovery? I accidentally deleted a folder with important files.