It’s like the Galaxy S5, but mini. Quick subtraction shows that the Galaxy S5 Mini shaved off 10.9 mm in height and 7.2 mm in width, but added 1.2 mm in thickness when compared to its larger brother. The Mini wasn’t just scaled down on the outside; the screen resolution, processor, RAM, and battery capacity all take a hit. But the question remains: does this minor change in size make a major difference in repairability?

Given its similar-but-smaller internal design compared with the big-brother S5, our European-sourced Galaxy S5 Mini scored the same 5 out of 10 on repairability. Yet, because this phone came from outside of the U.S., we saw a significant change in who provided the circuitry — instead of Qualcomm dominating the communications/power field, we saw some of the more international players, including TriQuint, R2 Semi, and Samsung’s own Shannon brand.

• On the back of the display, with the home button still attached, we find a few points of interest:

• After removing the daughterboard, we spy an extra antenna interconnect cable that wasn’t present in our Galaxy S5 teardown unit. We suspect this is for the Band 7 antenna (for European coverage). The green coax cable connects to the standard WCDMA and LTE bands, but Band 7 is LTE-only, and operates at 2.5 GHz — so it’s a separate antenna for better antenna performance.

• Time for Science with iFixit! Today we’re talking about Envelope Tracking. First developed in the 1930s to improve efficiency of high-power AM radio transmitters, Envelope Tracking is the continual monitoring and tuning of the power amplifier to match the power needed for the transmission, reducing wasteful excess energy supplied to the radio. To simplify: less wasted power for longer battery life and cooler operation. Our Euro Mini sports an R2 Semiconductor R2AA217C Envelope Tracking Modulator, which controls the TriQuint TQP9059S Power Amplifier. Of the few phones that support Envelope Tracking, this is the first we’ve seen that isn’t powered by a Qualcomm chip.

• What sort of chips can we find on this bite-sized motherboard? Let’s check ’em out: 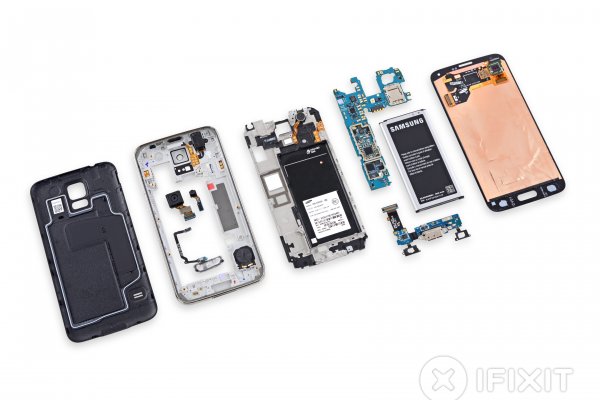