We’ve been good little girls and boys, and the teardown fairy has rewarded us with a brand new toy. The Anki Drive has been high up on our wishlist ever since it appeared at Apple’s dubba-dubba-dee-cee this June—and we were not disappointed.

The surprisingly straightforward disassembly made for a quick job of sussing out the Anki car’s construction. There are three screws in the entire car, and battery replacement is fairly easy (even though it requires basic soldering skills). Accordingly, the Anki Drive earned a solid 8 out of 10 for repairability. Scoring tabulated, we moved on to the elephant in the room: Just how does this thing work?

Find out in the Anki Drive Teardown 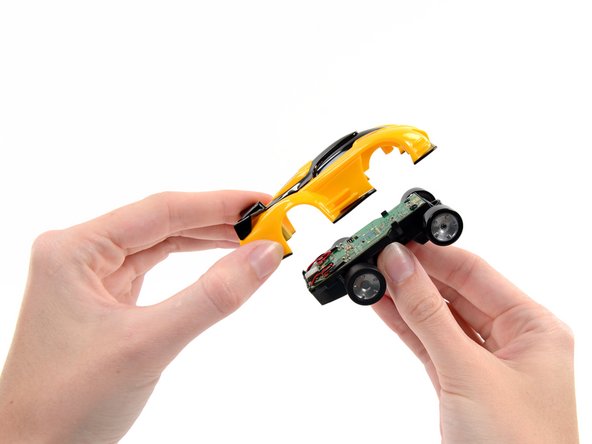 • There was no way we were going to proceed to the teardown without trying the Anki Drive first. So guess what we did.

• We found the track’s surface covered in tiny ridges of varied patterns. With unique patterns along the track, the Anki car can read a single mark and know exactly where it is—then read a second mark and know where it’s going, and at what speed.

• Not a lot of processing happens in the Anki car itself—a base station iPhone or iPad running the Anki app interprets data, plans out the car’s strategy, and sends control information back.

• To reduce the Anki car’s bulk, the motherboard also does the work of a midframe: it hosts two gear guides to keep the drive gears aligned to their motors, in addition to hosting the image sensor, microcontroller, and Bluetooth chip.

• A combination light guide/lens component directs infrared illumination from an LED onto the track, while directing images back onto the board’s image sensor to read the track patterns as they whiz by—a lot like an optical mouse.

• The processing power onboard the Anki car: