iFixit is celebrating its 10th anniversary! It’s been an amazing ten years. As repair fanatics, we’re grateful to have spent the last decade doing something we love.

But, most of all, we’re incredibly thankful to all the other people out there who have been fixing things and (especially) teaching others to fix things. Repair is important. It saves the planet, it makes people’s lives better, it connects us to our things, and it even saves people money. The more people who have the knowledge and resources they need to fix their things, the better off we all are.

We couldn’t do what we do without all the other fixers out there. Together, we’re well along the way on our mission to fix every thing.

Of course, as with all major milestones, our 10th anniversary has inspired a bit of reflection. Looking back, here a few significant moments in iFixit’s history:

10 years ago, we started a journey. It began with two pimple-faced, scrawny college freshman writing six PowerBook repair guides (check out this really early version of the site). We’ve grown in scope a bit since then—and it’s only happened because of you guys. Now, iFixit has 600,000 members in almost every country across the world. We host thousands of repair guides that have helped millions of people fix cars, computers, and even espresso machines. And we wrote less than a third of them—the rest of our free repair guides are written by expert community members like you.

We’re known for our teardowns. We fly our disassembly engineers across the globe to get a look inside iPhones and iPads before the devices debut in the United States. (Timezones, it turns out, are magic.) We’ve been trying to perfect the art of teardowns since 2006—before teardowns were even known as teardowns. Back then, we called them ‘First Looks.’ Teardown definitely has more of a ring to it. By the way, the first device that ever tangled with our spudgers on a teardown table: the MacBook Pro Core Duo A1150. We’ve come a long way since then—here’s our modern repair manual for that same computer.

Our team has written thousands of repair guides for a boatload of electronics (no boats yet, but that’s just a matter of time). But we can’t create enough repair manuals on our own. We realized years ago that if we were going to be a repair manual for every thing, we needed some help. In 2010, we opened up our site to the community. We wanted to make you guys our partners in repair. And you are: the people who use iFixit every day also contribute to it. They ask repair questions, help users troubleshoot, edit guides, and create new repair manuals. Thank you for helping us get repair knowledge to the people who need it.

People sometimes call us crazy for wanting to repair computers instead of buying new ones. But things are changing. In the past three years, fixing has taken off all around the world. It’s gaining speed and momentum. Recently, repair clinics started popping up all over the Netherlands, then spread throughout Europe, the United States, and Canada. Now, barely a week goes by that we don’t hear of another fixit clinic or repair café opening up shop somewhere.

5. iFixit gets a new look 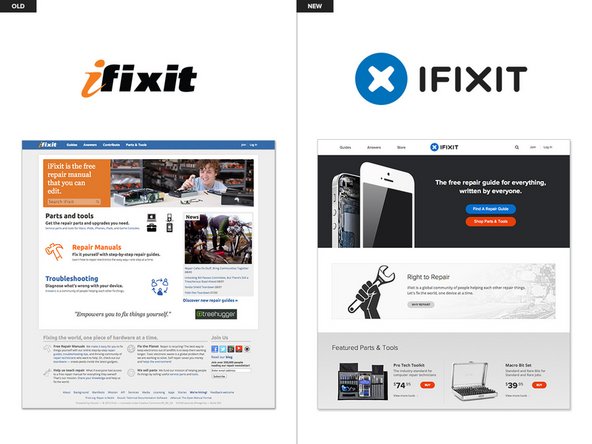 Today is a really big day for us—and not just because it’s our anniversary. We’re launching a new look and new logo. We want to make repair accessible to everyone around the world, and there’s no tool that has made repair as open and easy as the Phillips screwdriver. That’s our inspiration. Our new logo reflects our mission, to make repair possible—even easy—for everyone in the world. We can’t wait for ten more years of fixing.

iFixit Community Survey: The Results Are In