Repair is global: it happens everywhere, every day. And that means there are as many ways to fix a phone as there are fixers in the world. When you’re a fixer, you constantly have to adapt to the problem, the setting, and the tools at your disposal. 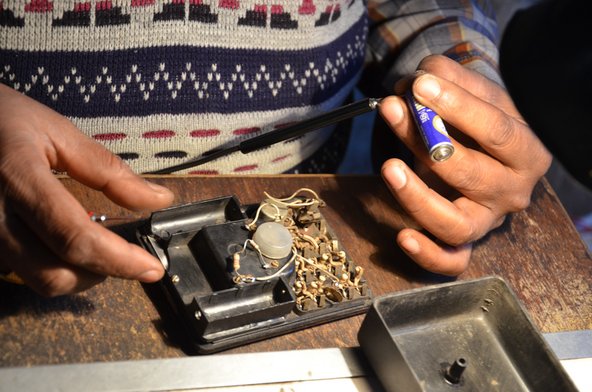 Maybe one of the best examples of adaptation and creative repair is jugaad—a Hindi word that has received a lot of attention lately. The term refers to the process of engineering or repairing through frugal means; in other words, using whatever you have at your disposal for an innovative fix.

It usually entails using materials that weren’t designed for the task at hand as substitutes: for instance, jugaad vehicles, which might be made of a wooden cart, a diesel water pump, and makeshift steering.

Jugaad repair is most common in India, where scarce resources demand creativity when it comes to fixing. But, recently, many have come to see jugaad as a movement—a new way of thinking about our approach to engineering, repair, and much more.

For some fans of the jugaad approach, this outside-the-box method of problem solving isn’t just for repairing a pothole or a phone—it’s an innovative business model for large or small corporations.

Consider the recent book Jugaad Innovation: Think Frugal, Be Flexible, Generate Breakthrough Growth. Its authors see jugaad as a “business tool in the west.” Their book argues “that the West must look to places like India, China, and Africa for a new, bottom-up approach to frugal and flexible innovation.”

Whether they’re searching for a new angle in the business world or just looking to fix an iPod, those who champion jugaad argue that it’s a faster, cheaper, and more efficient means of getting things accomplished.

But the celebration of jugaad innovation has drawn plenty of criticism as well. Many argue that the jugaad method of repair is an inherently flawed approach—that a jugaad fix is often a short term solution that’s riddled with limitations. A quick fix can be useful at the time, but what about the underlying problem?

There’s also the issue of safety—for instance, the aforementioned jugaad vehicles are often riddled with problems such as faulty braking systems. In some places, the concern over safety in jugaad creations and repairs means that jugaad is outlawed.

The debate over the value of jugaad innovation often hinges on the issue of setting. Garima Aggarwal Roy argues that while jugaad solutions are “worth appreciation” for their novel approaches, ultimately they aren’t “refined, scalable, for the same problem in a different environment or situation.” If the setting were different, the resources better quality? “Jugaad will take a back seat.”

When it comes to jugaad as a business model, some question whether jugaad should be considered innovation at all. “Innovation has to follow a cycle of process that should sustainable to solve a problem, and it should address an unstated need in the long-term. Jugaad, on the other hand, is a short-term fix,” Anuragi Raman writes.

The great jugaad debate doesn’t seem to be coming to a close anytime soon, with plenty of voices in the mix. What say you, readers? Do you think jugaad innovation and repair is an example of “frugal and flexible innovation”? Or are there questions of longevity and safety in jugaad creations that require serious consideration? Perhaps you find yourself somewhere in the middle? Tell us where you stand.