This Android-powered Ouya console is the first of its kind. It’s specifically designed to be open to professional and amateur game designers alike, with free software development tools included with every console. Sounds like it’s right up our alley.

Full disclosure: The folks at Ouya tout this to be “the first totally open video game console.” They have so much confidence in the Ouya, in fact, that they sent us a retail unit to take apart. Game on, folks. 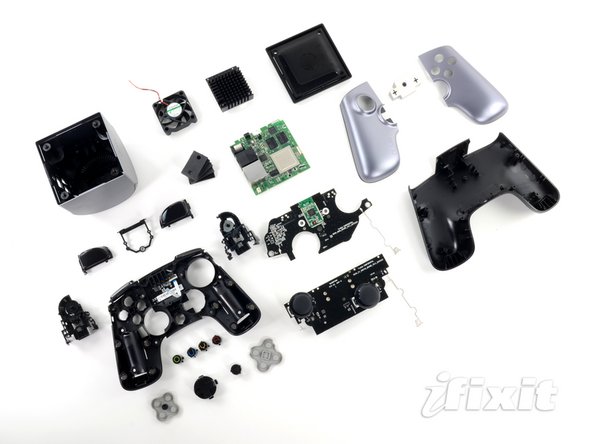 The small cube (and its controller) came apart with little difficulty. Those with long-haired pets will appreciate that it takes about five minutes to pop open and clean out the heatsink and fan. As a result of its disassembility, the Ouya scored a stellar 9 out of 10 on the repairability scale.

• The inside of the Ouya features a very clean and simple layout. The motherboard, I/O ports, and fan are tucked into the console as a single assembly.

• It’s rare that we see a design that intentionally adds weight. Unlike cell phones or tablets, which need to be light and mobile, the Ouya needs bulk to stand up to the cables on the back, and is fitted with five metal weights that add nearly two ounces of bottom-heavy staying power to the diminutive console.

• The fan is the only modular, easily-removed component in the box—which is fortunate, as it’s also the only moving component, subject to wear. The fan’s a standard, off-the-shelf part, so you can easily replace it if it kicks the bucket. Boouya.

• Ouya engineers chose to solder the heat sink in place on the motherboard, for improved mechanical strength over clips. They were were (rightfully) worried about such a small console being knocked around or dropped, and soldering the heat sink down proved a much tougher design, better at surviving drop tests.

• A lone IC, a Broadcom BCM20730 Bluetooth 3.0 transceiver is charged with running the entire controller. With an integrated ARM Cortex M3 processor, it’s capable of reading all of the button and joystick inputs and sending them off into the ether (or really, back to the Ouya console).

We’ve got more where that came from. Visit the full teardown for more Ouya action.