A lot of people tell us that there’s no such thing as repairable tech these days. Well, we’ve got two bombshells for you: BlackBerry’s back, and it’s super repairable. 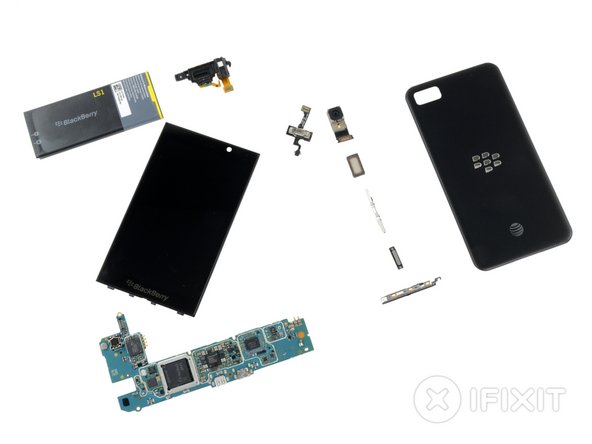 We heard that BlackBerry loyalists were hesitant to make the leap to a buttonless smartphone with a drastically shorter battery life. But with an ultra-responsive touchscreen and easily swappable battery, the Z10 will play Angry Birds all the way to Taiwan, and still bust an E.T. and phone home.

Despite its poor reception among critics, the BlackBerry Z10 is proof that smartphones can be thin, easily-repairable, and have replaceable batteries. All these traits yield an 8 out of 10 repairability score, something we haven’t seen in a smartphone for a while.
Teardown highlights:

* Removing the rear case simply requires prying a few clips around the perimeter of the Z10. Easy peasy. The rear panel contains an integrated NFC antenna, similar to the antenna found in the Samsung Nexus S.

* It’s a relief to see a smartphone in this day and age with a removable battery. With the right accessory, you even have the option of charging your phone as well as a spare battery at the same time–perfect for the 15 hour flight to Taipei.

* The rear-facing camera is dispatched from the motherboard with ease. The 8 megapixel auto-focus camera has a 5-element, f/2.2 lens, with a dedicated ISP (image signal processor) with a 64 MB frame buffer. The “backside illumination” sensor increases the amount of light captured, greatly improving low-light performance.

* The display assembly is held in place with several smaller-than-usual screws (T2 Torx) and just a few light adhesive strips–no match for our prying experts.

* The display unit is ultra thin, a feat achieved by some serious fusing. The digitizer is applied directly to the glass and fused in turn to the LCD. The downside to this design decision: shattering the glass means losing all touchscreen capabilities. A drop from ear-height on concrete spells death.

* The digitizer cable is home to the Synaptics Clearpad 3203 Capacitive Touchscreen Controller, which manages all the snazzy Z10 gestures.

* While major components come out of the BlackBerry Z10 without much fuss, once you get down to the small case peripherals, things get a little more dicey. The headphone jack, power switch, ambient light sensor, and earpiece speaker housing are built into a single assembly, held in place with some tough adhesive.

* A few of the major ICs found on the motherboard:

Check out the full teardown.