I’m greeted by an angry battle cry as I approach the teardown table late Tuesday morning. As a new iFixit writer, I’ve been hoping to catch a teardown in process for a while now, but the speedy and efficient teardown team is usually packed up by the time I arrive. I didn’t expect to see the Microsoft Surface Pro teardown in action at eleven in the morning, but there appears to be a problem.

Sitting with the Surface Pro in his lap, Andrew can’t remove the front panel of the device. And he’s not thrilled. When I ask how long he and Miro have been trying to separate the front panel, they shake their heads.

“Too long,” Andrew says as he diligently works at the Surface Pro with a guitar pick. “Ugh.”

I take a seat on the floor to watch the action as tech writer Brittany snaps some photos of the frustrated crew. Alternating between the heat gun and guitar picks, the gentlemen have been hard at work severing unyielding adhesive all morning. All teardowns are fueled by coffee and music, and this one isn’t any different: the coffee is freshly brewed as the Ace of Base Pandora station is providing a steady stream of 90s hits. The teardown itself, however, is stalled. 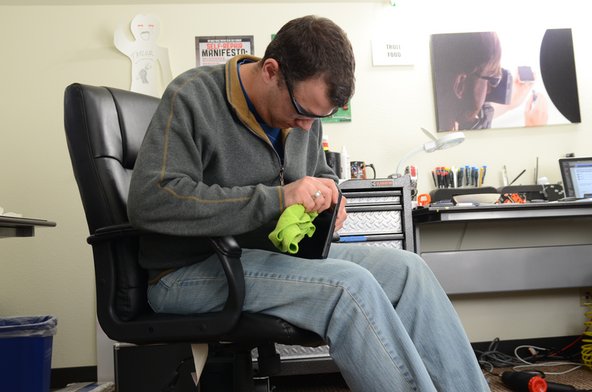 While Andrew takes a break to grab some more coffee, Miro takes over with renewed vigor. “I’m hearing crunching noises!” he exclaims, which sounds promising. And finally, with Men at Work providing the appropriate background soundtrack, the display case cannot hold on any longer: off it comes—along with a couple pounds of adhesive. “That is precarious!” Miro says, peering into the machine.

The teardown can finally continue. With the most difficult part of the process behind them, the team works quickly. Like a well-oiled machine, each individual goes to work. Andrew takes photos of the device against a white backdrop, sends them over to Miro’s computer, and Miro offers suggestions to get the best picture possible. “Maybe one more, keep the heat gun steady,” he instructs. “That’s perfect.” As Miro edits and uploads images of the Surface Pro, Brittany and Jake write the captions, adding witty and informative descriptions to the images.

The action continues well into the afternoon. There’s a quick break for a lunch of Mr. Pickles sandwiches, but then it’s right back to the Surface Pro. When Andrew gets a particularly close photo of the tar-like gobs of adhesive that were previously holding the front panel onto the device, there’s a collective groan. “They did not want you getting into that,” someone remarks.

At one point, Andrew makes a point of showing me where the battery is located, and it’s not pretty. It’s buried under the motherboard. Replacing the battery wouldn’t exactly be an easy process—you’d have to navigate around the copious adhesive first, which proved to be an expletive-inducing challenge for our team. And then there’s the instructions on the battery itself: DO NOT REMOVE.

Andrew shakes his head. “This thing is not going to get high repairability marks.”