GoPro recently released the Hero3, a Wi-Fi-enabled, 4K-resolution-capable camcorder that can be submerged into almost 200 feet of water with its protective case. Yet all that tech is housed in a teeny-tiny package that measures 59 x 41 x 21 mm. What kind of hardware is required to record 4K resolution? Does it have fairy dust inside? We know of only one way to find out.

Once it submitted to our screwdrivers, the GoPro earned a very respectable 7 out of 10 repairability score; the housing disassembles easily, the components are mostly modular, and the screws are non-proprietary. And as a bonus feature, the lens is a separate unit, so it’s quite replaceable if you decide to use the GoPro without its protective case (and are misfortunate enough to drop it onto its lens).

To the teardown, Batman!

* Minimal adhesive secures the front cover. The adhesive can be a tad difficult to work with, but it poses no real challenge to opening the device (as opposed to the adhesive that holds the iPad together, for example).

* Four surprisingly-long (8.1 mm) T4 Torx screws hold most of the the GoPro internals together. Although many folks may not have a T4 Torx screwdriver laying around the house, it’s not terribly difficult to source a driver for the non-proprietary screws.

* The Hero3’s 3.7 V battery is rated at 1050 mAh/3.85 Wh, a 50 mAh decrease from previous models — presumably due to the device’s smaller size. Of course, the battery is intended to be easily replaced by the user, and requires no tools to access.

* The image sensor pops off the motherboard assembly and can be replaced independently of the rest of the board. This should keep repair costs down if the sensor itself dies, but not the whole motherboard. 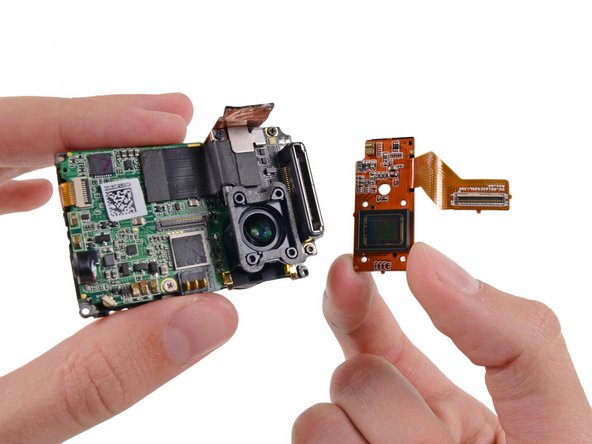 * Most components in the Hero3 use very little power and generate minimal heat. A light coating of thermal compound on the image processor is the most aggressive cooling feature in the device.

* Replacing the LCD requires the use of a heat gun and a metal spudger, as the LCD display cable is securely glued to the midframe.

* Chips on the motherboard: