It’s been a long time, but after six years Nintendo has released a brand new revision of the Wii console: the Wii U. With all of its shiny new features and redesigned internals, we needed to get our hands dirty with an in-depth teardown of both the console and its innovative new GamePad controller.

Anxious to get a look at the new hardware, we dove into the console first. No big surprises here, as it’s assembled in typical Nintendo fashion with an abundance of hidden Tri-wing screws—no match for our teardown experts, but a pain for modders and repairers. 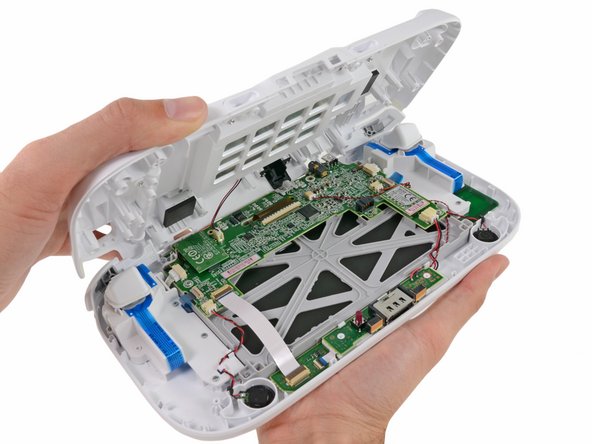 The GamePad controller’s imposing size is a result of the large screen and buttons, with plenty of room for the internal circuitry and even room for a much larger battery in the user-accessible compartment.

Aside from the use of Tri-wing screws on both the console and the GamePad controller, the two devices impressed us with their repairability and modularity. Designers opted for screws over adhesive or clips, most components can be replaced independently of their respective motherboards, and the battery is easy to get to and replace. In light of this, the Wii U scored an admirable 8 out of 10 on our repairability score.

* The optical drive and heat sink dominate the majority of the console’s internal Wii-al estate, and are considerably beefier than those found in the Nintendo Wii.

* We suspect that the large optical drive may be a by-product of the larger motherboard underneath. A case expansive enough to accommodate the motherboard leaves some extra room for a bigger optical drive. Possible benefits to using a clunkier disc-reader could be reduced cost, quieter operation, or improved longevity over a slimmer drive.

* Examining the underside of the motherboard, we found three separate wireless modules:

* Good news for those looking to extend their playtime on the GamePad controller—there’s plenty of room in the battery compartment for an upgraded pack.

* The larger controller on the Wii U is a design choice, comfortably accommodating the screen, buttons, and circuitry with room to spare.

* Separate button groups are good news for the button mashers among us, as each unit will be relatively quick and inexpensive to replace.

Check out the full Wii U teardown for more of the specs.