We got our disassembly-obsessed hands on the Nexus 4 today, and we didn’t even have to send anyone to Australia this time! This little beauty showed up in our mailbox — early delivery courtesy of UPS! 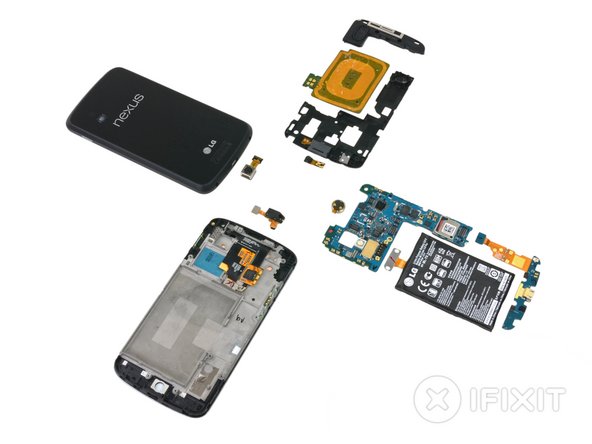 After removing some screws and prying with our trusty plastic opening tool, we made quick work of the Nexus’s outer case. Good news: the Nexus 4 earned high marks for repairability. Some heavy adhesive slowed down battery removal, but every other component (including the speaker assembly and the motherboard) came out with relatively little effort. Keeping pace with Apple’s iPhone 5, the Nexus earned a solid 7 out of 10 on our repairability scale.

* A number of pressure contacts power the NFC antenna and connect the induction coil needed for wireless charging to the motherboard. With “wireless charging” listed as an official tech spec for the Nexus 4, we were anxious to try it out on our device. Alas, the phone doesn’t ship with a wireless charger. Sadness.

* Screws hold the battery connector in place. At first the disassembly looks easy, but the battery is secured to the case with quite a bit of adhesive, requiring a lot of prying.

* The entire device only contains four different-length screws — all common screw types — for a total of only 15 screws. Once the back cover and inner frame are removed, pressure contacts make all of the inner components a breeze to replace.

* The glass is fused to both the display and the display frame. So don’t crack the glass unless you’re good with a heat gun, or you’re fond of replacing the glass, display, and frame together (which requires muchos buckaroos).

* The speaker enclosure is held in place with two screws and no cables — spring contacts connect it to the rest of the phone, making its removal a snap.