The 13″ Retina MacBook Pro came out earlier this week, and thankfully we didn’t have to wait long to analyze it on our operating table. Over the past couple of months, we’ve been pretty vocal about the MacBook Pro 15″ Retina’s shortcomings — specifically, its lack of repairability, upgradeability, and recyclability. So, as we dove into the newest member of the Retina family, we were quite interested to see how the 13″ model stacked up to its big brother.

The 13″ MacBook Retina is slightly more recyclable than the 15″ Retina. Once inside, it took us *only* 15 minutes of prying to remove the battery, and we didn’t puncture the battery cells. It was definitely a doable feat (compared to nearly impossible for the 15″ Retina), but still a far cry from the no-adhesive, non-Retina MacBook Pros. 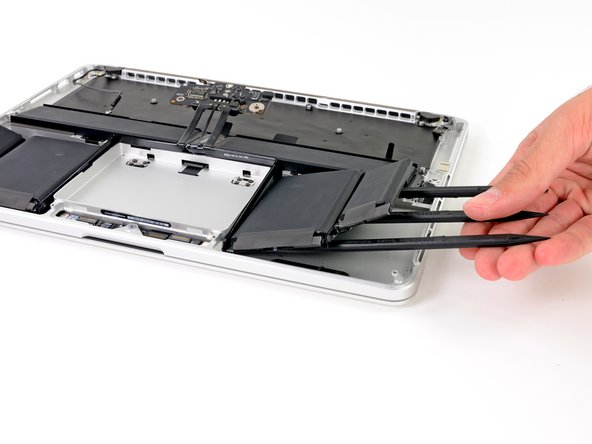 The 13″ Retina’s design is a step in the right direction, but it’s a very small step: the RAM is still not upgradeable, the exterior screws are still proprietary, and replacing the display will still cost an arm and a leg. Accordingly, it earned a 2/10  repairability score, a meager one point higher than its 15″ sibling.

* As always, we start by disconnecting the battery, a simple task that requires no more than releasing a connector. But wait, what’s this? Instead of the good ol’ run-of-the-mill battery connector that we’ve seen in most other Apple laptops, the battery is connected using several screws that hold a connector board in place. From what we can surmise, the little PCB serves only as a bridge between the battery control board and the logic board. Very odd.

* The most striking layout change in the 13″ version is the rearranged battery cells. Their placement allowed Apple’s designers to cleverly tuck the SSD away underneath the trackpad assembly.

* Our first thought was that a standard 2.5″ laptop drive might fit in the SSD space, and it almost looks like the little nook was designed with that in mind. Yet, our 9.5mm Crucial SSD didn’t allow the bottom cover to be closed, but only by a smidge. We’ll see if a 7 mm or 5 mm super-slim hard drive could be incorporated into the space.

* The asymmetrical blade spacing of the fans is great at breaking up annoying air patterns that symmetrically-spaced fan blades might generate. But while these fans are pretty cool, they can’t be removed without first taking out the heat sink, which means you’ll have to reapply thermal paste to the CPU in order to perform the job properly.

* Chips we found on the logic board:

* This time we’re excited to find two of the six battery cells held in with screws and no adhesive. We made good progress initially, but things slowed down when we got to the outer cells and had to start slowly spudgering under the edges. Listening for the snap, crackle, & pop of breaking adhesive, we cautiously pushed forward until all six cells were free.

* Battery removal took us roughly 15 minutes to complete, and we didn’t have to use a heat gun. All we needed was a Torx screwdriver and three spudgers. In contrast, it took us three attempts to successfully remove the 15″ Retina’s battery without puncturing it, and the third attempt took over half an hour to perform.

* The trackpad board contains several connectors and two prominent ICs: a Silicon Storage Technology SST25VF020 2 Mbit SPI Serial Flash, and a Broadcom BCM5976 touchscreen controller. Up until now, we haven’t noticed the inclusion of flash memory on the trackpad. We don’t know why a trackpad would require flash memory, but it appears that the same IC was also included in the MacBook Pro 15″ Retina trackpad.

* Just five screws keep the trackpad in place. You can actually replace it if it breaks, which is pretty much impossible on the 15″ model (since the trackpad is covered by the battery).

* At first we thought we found some kitten fuzz inside a couple of screw holes, but it turns out that Apple glued in a small piece of steel-wool-like metal on top of two of the speaker screws. Why, you ask? We don’t know, but we have some hypotheses, and we’d love to hear if someone has a plausible answer. Possibilities include: 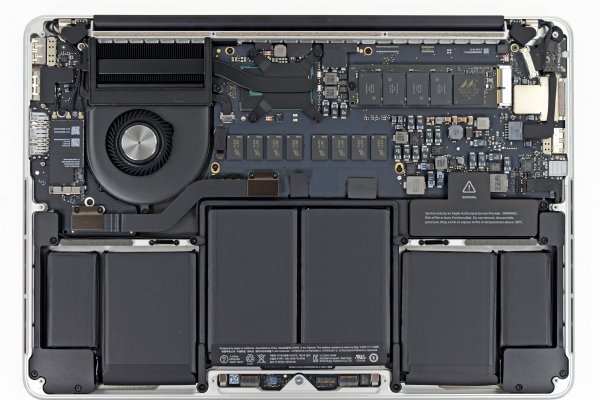