The most interesting thing about Tuesday’s Right to Repair hearing in Washington state was what the tech lobbyists wouldn’t say.

Representatives of manufacturing and technology trade groups largely avoided answering direct questions from Washington legislators, who seemed receptive to a bill aimed at empowering independent and small business repairs. Despite the opposition’s well-worn description of Right to Repair as “a solution in search of a problem,” legislators had plenty of problems to throw at the lobbyists.

Why did I have to mail my Xbox to Microsoft to replace a single fan? Can repair agents steal companies’ secret designs during repairs? Do I own this phone, or am I seemingly just renting it?

“I would love to follow up with you and have some of [my companies] walk you through the process that these devices take,” said Samantha Kershul, regional executive director for electronics lobbying group TechNet, when asked by Sen. Doug Erickson (D) about intellectual property theft. “I’d love to connect you with some of my companies after the committee.” (Is the maker of Red Dead Redemption 2 going to fly to Seattle to show how you can pirate the game for friends while replacing a PS4 hard drive?)

“Senator, clearly there are a lot of issues that we need to walk through,” Brown told Sen. Marko Liias (D), when asked why owning an iPhone is different from owning other products. After vouching for warranties and authorized repair networks (and stating that you can be sure they won’t “put TikTok on your phone”), Brown said they needed “to have a serious discussion.” (Which is quite a lengthy non-response to the question, “Do I own this iPhone, or just rent it?”).

It’s not surprising that lobbyists working against Right to Repair bills prefer to meet politicians in private. It’s their preferred venue for discussing hackers moving to Nebraska and potential injuries from punctured batteries. What is surprising is that they seem to have largely surrendered their ground on public discussion, leaving motivated repair backers lots of room to share real-world numbers and experiences.

iFixit’s own Olivia Webb spoke on behalf of the 1.3 million people in Washington who had visited iFixit’s website in 2019. Webb noted that she came to iFixit with little repair knowledge, but had since worked on her sister’s phone. Because the part wasn’t original, however, the repair was ultimately unsuccessful.

“Hopefully, this shows you that people want to repair their devices, they want access to the information and tools, but the manufacturers are making it difficult,” Webb said.

Repair veteran (and livestreamer of everything) Louis Rossman noted that some companies go further. Apple, Rossman testified, instructed the manufacturer of a MacBook charging control chip not to sell the part to anybody outside Apple. As a result, Rossman and others can’t fix that part of a MacBook; a customer has to have Apple replace the entire logic board for $1,500 or more, and lose their data.

“So when people say that this bill is a solution in search of a problem, I’ve had thousands of customers that want their data back that disagree,” Rossman said.

“It is simply not the case that allowing someone to swap out a phone screen will let that person reverse-engineer every bit of software on the phone or access private data,” Wheeler said. “Apple and Google can still design phones that protect user security while allowing private repairs.”

The committee seemed receptive to the stories and arguments presented Tuesday. It helps that the bill was repeatedly framed not as a matter of schematics and APIs, but jobs and consumer choice.

Sen. Bob Hasegawa (D), sponsor of the bill, started the hearing by describing it as “just a good small-business bill.” The tech giants, he said, have plenty of advocates, especially in Seattle. Not everybody can work for tech giants, though, and there’s a lot of opportunity for entrepreneurship in servicing the tech that surrounds us, Hasegawa said.

He finished with a story about how, after having his own smartphone battery replaced at a kiosk, the original manufacturer refused to offer other repairs on it, because it had been worked on by an unauthorized agent.

Repair advocates have an answer, but trade groups seem to prefer a serious, robust conversation in a closed office. 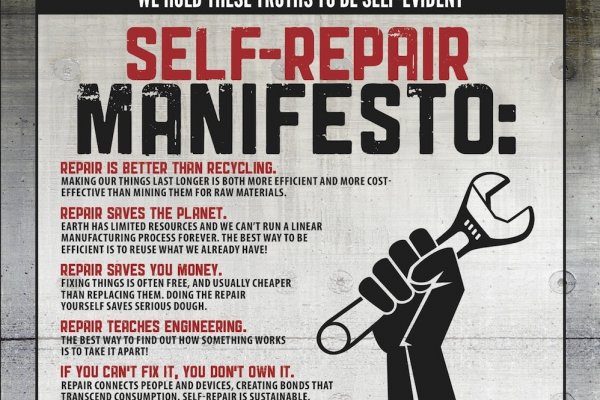 How timely. I just got off the phone with my local Apple Authorized Repair shop. They will not replace the 50¢ cable/plug/socket assembly I broke when the cat jumped on my back during an upgrade, because it's against Apple policy. I cannot do it myself because Apple doesn't sell parts. They will only replace the entire logic board and display assembly for $1,200. They will not install the third-party SSD I've purchased because Apple's diagnostic tools don't like it, and never mind that Apple doesn't even offer an upgrade for that particular part, not even to their own authorized service personnel. They will not leave the case open for me so I can do it myself - that too is against Apple policy.

So I'll pay $1,200 to return the whole thing to my dining room table, precisely where the debacle started, to try again. This time with the cats locked in the bathroom.

I wish I could pretend this was somehow peculiar to Apple, but it's not. In fact, my experiences with other manufacturers are much worse.

Car manufacturers used to pull the same crap by refusing to provide parts and documentation to independent garages. But right-to-repair laws have helped to counteract that.

It all boils down to a simple, one-word, reason … GREED. The tech companies, and the executives making the decisions, are after as much as they can get no matter what the negative consequences or who else is being disadvantaged. It is just disgraceful.

Once upon a time when I worked for a radio and repair shop, if I got a TV set in to repair, I could just contact the agent and buy a schematic diagram for that TV set and repair it. Spares were freely available. Back then there wasn’t anything like LCD or LED or 4K or anything like that. They were analogue CRT TV sets. There was no such thing as DVD or Blue Ray. The CD had just been launched. There were VHS and Betamax video recorders back then. When it broke, you could easily tell just by turning it on what was brokem.

These days, I get this fancy expensive ridiculously large 4K 3D TV set flashing a red LED at me. When I look at the user manual, It doesn’t tell me what the flashing LED means. No problem, let me contact the manufacturer. Surely they will tell me? No chance at all! They won’t even give me the time of day. I need to send it in to a QUALIFIED agent to be repaired with a 4 to 6 week turnaround and pay them almost as much as the TV set was bought for!

That is why I am for the Right To Repair bill.

Is anyone planning on a physical presence in Oklahoma?

I live about 12 miles from the state capital and have submitted comments to the author of HB3724 and to the Oklahoma assemblyman and senator who represent me. They both live in my small town and have businesses here.

If I can help by providing a physical presence at the capital just ask.