We heard the Vizio Co-Star was coming out…but something was awry. To the best of our knowledge, Vizio did not divulge any actual specifications for the device. How fast is this little box? Is there a hamster running on a miniature treadmill inside? Would it fare well against our spudgers? We knew of only one way to find out.

During our journey, we found the Co-Star to be an easily-fixed device, although there’s not much inside to fix—it is, after all, a circuit board in a box. Even so, the little guy got a great 8 out of 10 repairability score: all screws are of the Phillips variety, it pops open with ease, and most internal components are readily accessible.

Oh, and we took apart the fancy remote as well—because that’s how we roll. 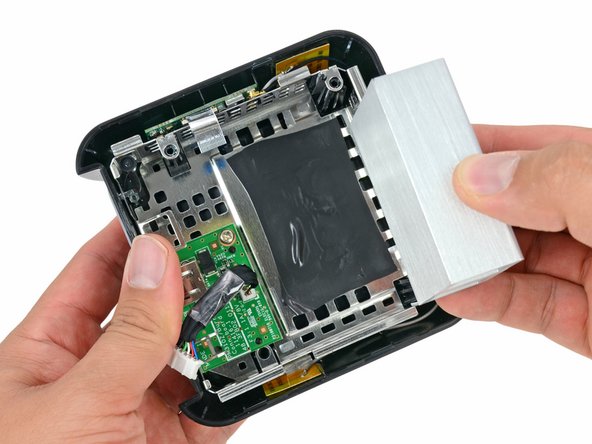 Highlights:
* As soon as we’re inside, we pull off what looks like an EMI shield—only to find a thermal pad sitting on top of a sea of small resistors. It’s not often that we encounter cooling for the back side of a motherboard, but Vizio took extra precautions since the Co-Star has no fans.

* A grand total of just five screws and two cables must be removed to free the motherboard.

* We’re used to device innards being dominated by a single component, but those space hogs are usually batteries or power supplies. In the Co-Star, over a third of the real estate is instead inhabited by the aluminum heat sink.

* Why such a honker heat sink? The answer lies in air movement. Without fans to circulate air, there is no forced convection. Therefore, the Co-Star must rely on conduction and natural convection to keep the processor cool.

Some fun factoids on the Co-Star’s remote:
* Both keyboard bezel and rubber button cover easily detach from the rest of the remote, making it a cinch to clean off grime after prolonged use.

* An abundance of glue secures the trackpad to the front of the Co-Star remote, but pretty much everything else comes apart with relative ease.