Kyle Wiens, founder of iFixit, is leading a team of journalists on a documentary trip in Africa to meet the community of electronics technicians who fix and remake the world’s discarded electronics. They’ve been on the ground in Cairo during an intense week in Egypt. This post was originally published in The Atlantic on October 13, 2011. Brian X. Chen and Kyle Wiens contributed to this story. 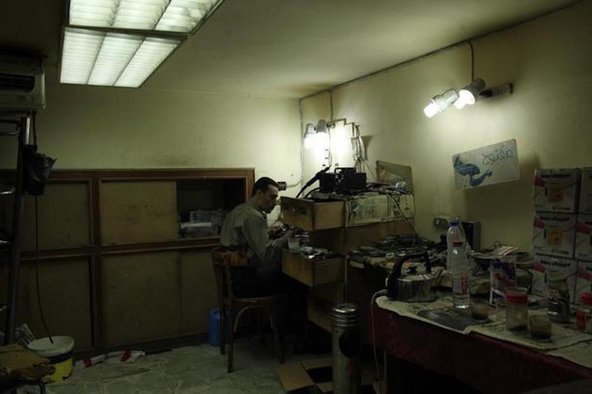 Cairo is on edge. Sectarian tensions are rising in the face of the first post-revolution election at the end of November. Political campaign posters are everywhere, and every corner shisha bar is filled with people chattering about politics.

There’s a lot to talk about, with over 70 parties vying for 300 seats, so the political discussion is unavoidable. Still, we were hoping that it wouldn’t affect our investigation of the local repair scene.

We were making good progress last Thursday, interviewing some repairmen in an indoor computer market near Tahrir Square, the site of the massive protests that ousted President Mubarak in January. We stepped outside their shop to take a break. Then shouting erupted, and a crowd formed around our photographer Justin. A well-dressed middle-aged man was screaming at him, demanding his identification.

Complete bedlam broke loose. The mall security guards showed up and hauled Justin out of the mob into the safety of the downstairs security office. The mall security chief was waiting for us. He looked like part of a local elder, sharply dressed and planted behind a weathered wooden desk, his hands in a steeple.

We attempted to make our case, telling him about the documentary and explaining that we had permission to film. Our accuser brushed our story aside, shouting, “If that’s what you’re doing, it would be legal.”

The government has long stirred up fear of outsiders through a myriad of outlets ranging from repeated proclamations on state television to children’s cartoons. It’s almost impossible to film in public places.

Eventually, we were able to convince the security chief that three Americans with rather conspicuous camera equipment were not covert Israeli operatives, and he let us go. We headed back to the hotel, wondering what in the world we’d gotten ourselves into.

Before we were interrupted by security that day, we had been interviewing two brothers, Islam and Mohamed, who repair laptops and monitors on the top floor of Bouston Mall, the most well-known downtown computer district. As we walked into their shop, Islam, a slightly pudgy man in his mid-twenties, was just starting to reassemble an LCD monitor.

Meeting repair technicians in new places can be a mixed bag. Anyone can claim they fix things, but it’s hard to know if they’re any good at it until you actually see them do it. It’s best to wait and watch them tinker with things until they work.

Islam connected everything but left the case off, then powered up the four-year-old screen. He had a clever trick. All the circuitry on displays is in the back, behind the screen. Working on them involves trying a fix, turning it on, and then flipping it around or walking around the desk to see if it worked. Islam removed the last step from this process by mounting a mirror above the door.

He glanced up, saw the monitor was working, and smiled. Only then did he completely reassemble the display.

We came back on Saturday to continue filming, and Mohamed showed us some of his favorite laptop-repair techniques. It was immediately obvious that this wasn’t your typical neighborhood computer shop. These guys were armed with soldering irons, an SMD rework station (a hot-air machine that is basically a souped-up hair dryer for unsoldering computer chips), and a bevy of tiny screwdrivers. They weren’t just replacing broken circuit boards–they were fixing the bad parts themselves.

Mohamed showed us a fried laptop motherboard, and described the process of figuring out which chip was the problem. Once he knows where the defective component is, he rummages through his inventory, finds a compatible chip, and replaces just that component. This approach requires a lot of dexterity, but it’s very inexpensive and produces almost no waste.

Everything came to a head Saturday night. A group of Coptic Christians whose church had been burned down was peacefully marching to the State TV building near our hotel. Plainclothes police attacked the protesters, hurling rocks and provoking the Christians into fighting back.

They did, and complete pandemonium ensued. When the dust settled, 30 people were dead and hundreds wounded–the worst violence since January. The hospital sent out desperate pleas for blood donors.

The military has imposed a curfew, and no one is allowed on the streets between 2 and 7 a.m. Police are out in force everyone. We’re continuing to film, but our work is subdued. We’ve moved away from the politically sensitive downtown into the suburbs.

The city is taut as a wire, but the robust repair community keeps moving. The cellphone repair markets are thronging with business, the computer technicians are busy as ever, and the auto mechanics barely sleep.

The political revolution is intense and sometimes deadly, but it can’t break the spirits of the repairmen of Cairo, who continue to keep the city running, one fix at a time. They know that they’re needed more now than ever before.