“Dryers aren’t all that different than phones,” I say to the phone repair techs riding in the truck with me. They’re nervous. A few weeks ago, I fired off a quick late-night email, inviting them to tag along on an appliance repair call. Right now they’re focused on mobile phone repair, but I told them they needed to diversify their skills into other new and fast-growing verticals.

“Repair is constant problem solving,” I wrote. “If you’re not learning and growing, you’re setting yourself up to fail.” They believe it. Now we’re on our way to look at a fridge that’s stopped cooling food.

One tech, Dan, can fix most phone issues in about 15 or 20 minutes, but he’s never touched an appliance before. He tells me that his dishwasher has been out for a few months, but he’s too timid to open it up. As we approach the customer’s house, I reassure him fridges are just like the phones he cracks open every day. The only difference is that the device is about 50 times heavier and the screws are 10 times as big. Other than that, it’s not that different—these days, the fridge and the iPhone X he just fixed cost the same.

As we walk in, the customer explains when it started happening (two days ago) and what led up to the failure (clicking every three to five minutes). I hold the fridge open and listen. Nothing. We pull the fridge away from the wall a couple of feet and unscrew the back panel, revealing something that looks like the air compressor my dad used to fill my bike tires. I inspect a small black triangular box attached to the compressor and, based on the reported clicking sound, decide to pull it off to test it. Dan, the appliance-averse tech, brings out a Fluke multimeter, then connects the leads to check for resistance. Nothing.

Our customer has a failed compressor relay switch on their refrigerator. This component listens to the main control board of the fridge, which monitors a thermostat inside to determine when more cold air is needed. The board sends the signal, and this little triangle relays to the compressor that it’s time to circulate refrigerant and cool things down.

“Here’s our culprit!” I say, showing the customer the switch. “It’s not working, so even though the fridge has power, it doesn’t have the capability to cool itself. The part will set you back about $30-50.” Dan installs the new compressor relay we brought along. This time, when he holds the fridge door open: Click. Bzzzzhmmmmmmmm. All systems normal, another patient saved.

Repair is messy. It’s fickle. Spiteful. Frustrating. Exhilarating. Rewarding. Empowering. Repair can make you feel every one of these things all at once and then make you come begging for more. As consumers, it’s a fundamental right we have: to fix (or have others fix) the things we own. Unfortunately, it’s a right that we don’t exercise enough.

Manufacturers take an increasingly aggressive stance against DIY or third-party repair, especially in the realm of computers and electronics. They wield murky legalese and questionable intellectual property claims to stifle the rights of people worldwide to fix what’s theirs. They lead us to believe these devices aren’t made to be repaired. When your phone cracks, it’s just a fact of life. You’re being conditioned by aggressive sales, contract pricing, and obscure repair details into thinking that an iPhone or a Galaxy only has two or three years before it’s obsolete.

But when your washer starts having issues cleaning your undies, it’s not disposable, is it? It’s an emergency that must be fixed right away. You don’t run down to Sears (RIP) and buy a new one, you figure out what needs fixing. Most modern appliances are built to last about 10 years, and the dirty manufacturing secret is that most electronics are capable of lasting the same amount of time.

Manufacturers like Samsung and LG sell both phones and appliances. If an appliance of yours is broken, a quick Google search for the model number and the symptom pulls up thousands of results. You’ll find out how the device is assembled, wiring schematics, troubleshooting basics, and an array of readily available original parts for purchase. These parts are often generic and cross-compatible between devices. Unfortunately, the same amenities don’t exist for their phones—finding OEM parts, guides, schematics, and troubleshooting answers can sometimes be impossible. That’s because these manufacturers have chosen to support their appliances with third-party partnerships that provide necessary materials—but not their phones. 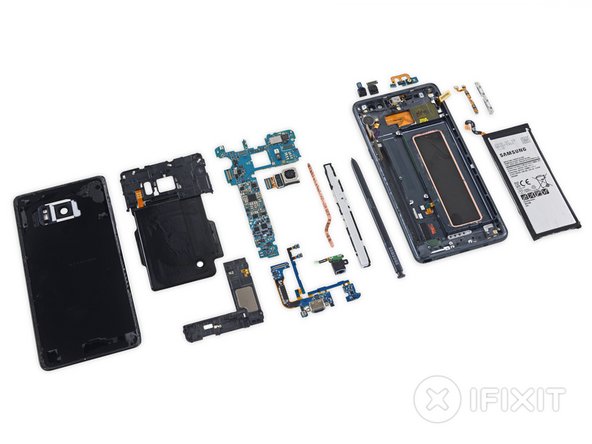 Last year, when some Samsung washing machines saw their lids pop off violently during use, the company partnered with DISH Network technicians to fix the issue, rather than rely on their limited number of in-house technicians. But when Samsung’s’s flagship smartphones were literally lighting on fire, customers were advised to put their phones in a fireproof box and…wait?

What makes a 300-pound refrigerator different, in repairability, than a smartphone? Both have fuses and capacitors. Both have computer chips and main control boards. Nobody wants to replace either one because of a slight defect. Yet manufacturers take much stronger stances against third parties for electronic repair than for appliances, even their own.

Here’s the rub: Everything breaks eventually, but in many cases, people are throwing away things that can actually be repaired. Phones and appliances are designed in relatively similar ways because the fundamentals are much the same. Both items have to deal with heat, insulate components against outside elements, and allow the user to issue commands. New models of each even cost about the same. So there’s no reason that we should accept that one is obsolete after two years while the other simply needs a tune-up.

Repair isn’t a dirty word. Obsolete is. To claim an old device is “sad” or “vintage,” and then actively work to discourage repair and reuse, is a heinous way to sell you something. All of these nefarious tactics are why we need Right to Repair legislation that protects the rights of everyday consumers—to either repair their own things or to find a trusted third party of their choosing to do the job for them. Society shouldn’t be relegated by manufacturers to consumerist pollyannas. As Apple’s  battery-gate exploits and subsequent finger-pointing for poor revenues exposed, manufacturers do not always have your best interests at heart.