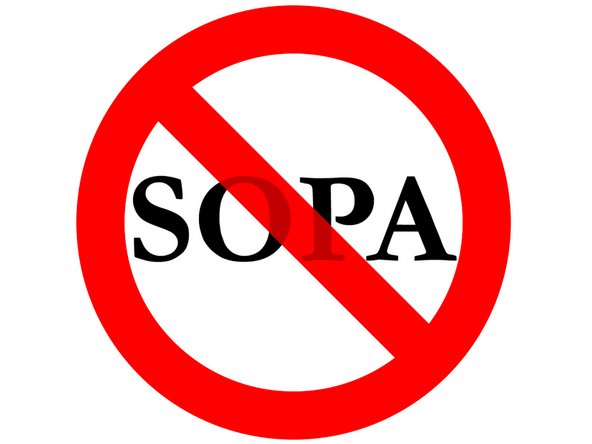 Many of you are already aware that many of your favorite websites have gone dark or posted censorship warnings today. Google, Wikipedia, Reddit, Imgur, and Craigslist, among a slew of others, are protesting U.S. legislation that would significantly impact the freedom of the internet.

iFixit stands with them.

The Stop Online Piracy Act (SOPA) and Preventing Real Online Threats to Economic Creativity and Theft of Intellectual Property Act (PIPA) are pieces of legislation currently under consideration by the U.S. House of Representatives and Senate, respectively. Both bills lack the correct technical language to do what they intend (you know, actually stop piracy), and instead are vulnerable to overly broad interpretation that could seriously impact the innovation, freedom, and secure operation of the internet.

There are plenty of places where you can get an in-depth analysis of what’s wrong with the bills, so we’ll keep it simple. These are the ways in which SOPA and PIPA would directly impact our operations here at iFixit:

In fact, it’s questionable that iFixit could have even succeeded in a post-SOPA world. We started in a dorm room in 2003 by writing repair manuals for electronics made by a certain big Silicon Valley company because they weren’t publicly available. If we’d chosen a hip “Web 2.0” domain like iFix.it (FYI, not us!), our site would be considered foreign even though it hails from the U.S. If a certain big Silicon Valley company didn’t like what we were up to, they could have filed a complaint and had our website blocked in the U.S. Game over.

Please take the time to call or write your representatives and let them know how you feel about SOPA and PIPA. It’s difficult for them to make the best decisions for us if they don’t know how we feel, so take a step back from the keyboard (Reddit’s down anyway), pick up your phone, and SPEAK UP!