Expecting to be one of the first people in the world to buy the iPhone 4, I was dispatched to Japan for its release last June. Much to the dismay of thousands of Japanese with similar intentions, my mission was thwarted: FedEx delivered hundreds of iPhone 4 boxes in California two days early.

We’re quick to adapt, and the rest of our teardown team got their hands on one of these early units. Rather than waiting in line at the Ginza Apple store, I worked on the teardown virtually from my Tokyo hotel room. The teardown was quite straightforward—the iPhone 4 was electronically complex, but easy to disassemble and work on. Opening the phone entailed removing the two Phillips #00 screws on the bottom and then sliding off the back cover. The ease of disassembly gave me plenty of time to analyze the internals.

Once we finished the teardown, I hit the streets of Tokyo to watch the actual iPhone release and then hang out with the Apple community. I didn’t need to buy a phone for myself, but I wanted to see the new iPhone firsthand.

I immediately noticed something odd about the Japanese phones: they had different screws on the bottom! These new screws looked like very small Torx (I guessed T3 at the time) but were actually something far more insidious.

Apple is switching to a new type of tamper-resistant screw. This is not a standard Torx, and there are no readily available screwdrivers that can remove it. This isn’t the first time they’ve used this type of screw—it first appeared in the mid-2009 MacBook Pro to prevent you from replacing the battery—and Apple is using a similar screw on the outer case of the current MacBook Air. This screw is the primary reason the 11″ MacBook Air earned a lousy repairability score of 4 out of 10 in our teardown last October.

Apple chose this fastener specifically because it was new, guaranteeing repair tools would be both rare and expensive. Shame on them.

So what is this screw?

It’s similar to a Torx—except that the points have a rounder shape, and it has five points instead of six. Apple’s service manuals refer to them as “Pentalobular” screws, which is a descriptive enough term. It’s certainly better than what I came up with, which was “Evil Proprietary Tamper Proof Five Point Screw.” It’s best I stay out of the naming business. 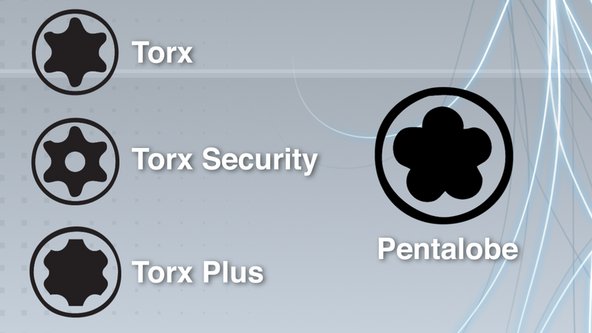 Contrary to what has been widely reported elswhere, this is not a security Torx screw. Security Torx have a post in the middle. Apple would never use a real Torx security screw with a post for two reasons: they’re ugly, and the posts break off easily with screw heads this small. To further complicate matters, Apple occasionally refers to these as “Pentalobe security screws.” Please don’t confuse them with security Torx.

This screw head is new to us. In fact, there isn’t a single reputable supplier that sells exactly the same screwdrivers Apple’s technicians use—which is Apple’s point. They picked an obscure head that no one would have. This new screw defeats even our vaunted 54-bit driver kit, which until now we’ve been able to claim that it’s all you need to disassemble just about any consumer electronics. Alas, no more. Thanks a lot, Apple!

Which devices are affected?

Now that we’ve got the background out of the way, what’s Apple doing with these new fasteners?

The largest 5-point Pentalobe screw used thus far was deployed in the Mid-2009 MacBook Pro. Apple calls this a “Torx Plus Tamper 6.” For reasons known only to them, Apple has switched away from these screws and is using Tri-Wing screws on current MacBook Pro models. A compatible Tri-Wing bit is included in our toolkits, so you don’t need to worry about this if you have the latest MacBook Pro.

The iPhone 4 has one of the smallest screw heads we’ve seen, probably for cosmetic reasons. This 5-point Pentalobe screw is actually slightly smaller than a Torx T1. Yowsers that’s tiny. The shape looks a little rough because this tiny screw is giving Apple’s manufacturing process a run for its money.

The new Air uses a significantly smaller 5-point screw than the MacBook Pro, but it’s still larger than the one in the iPhone 4.

A Solution: Liberate Your Hardware

This screw head clearly has one purpose: to keep you out. Otherwise, Apple would use it throughout each device. Instead, they only use it at the bulwark—on the outside case of your iPhone and MacBook Air, and protecting the battery on the Pro—so they can keep you out of your own hardware.

Fortunately, our always-creative hardware acquisition team has been on this problem for a while. It’s our responsibility to provide you with all the tools you need to work on electronics, and we have a solution for you!

The real solution is to get rid of these pesky screws so you can use a normal Phillips screwdriver on them. We now have replacement Phillips screws so that you can reverse Apple’s dastardly handywork. We have found a driver that works for the 5-point “Pentalobe” fasteners on the iPhone 4 case. It’s not a true Pentalobe driver — the tip is more star shaped than “flowery,” so there may be some slight play in the fit when using. This screwdriver gets the job done, but we don’t recommend it for repeated use. It’s really just a hack to get the screws out and then replace them with standard screws.

So go ahead, set your iPhone free with our iPhone 4 Liberation Kit! Rid your phone of those terrible Pentalobe screws forever. The $9.95 kit includes a Pentalobe driver, 2 replacement PHILLIPS screws, and a regular #00 Phillips screwdriver. 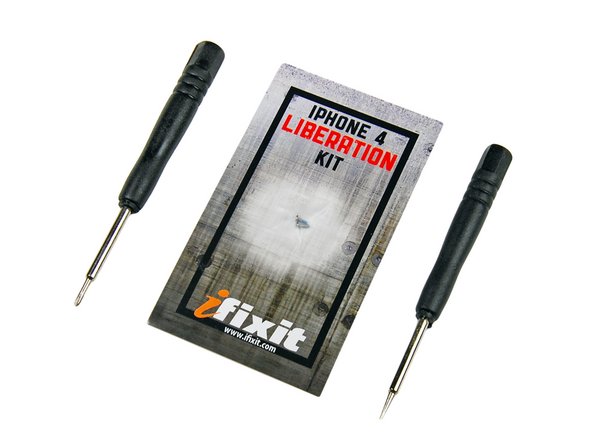 We’ve got a 5-point MacBook Air screwdriver in stock that unlocks this machine! Now you’ll be able to do your own repairs or upgrade your SSD.

Use the MacBook Pro 5-Point Torx Screwdriver if you’d like to remove your laptop’s battery. It’s the best way to ensure you don’t fry any sensitive components on machine while performing a repair.

Did they really replace the screws when people sent their devices in? I don’t see any proof anywhere else on the internet.